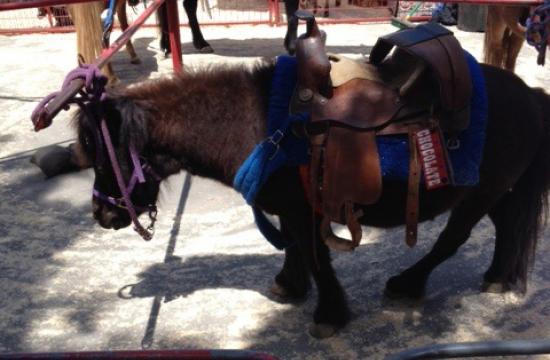 Despite attorney Don Chomiak’s suggestion that I somehow single-handedly ended the shackled pony ride at the Main Street farmers market, most of us are savvy enough to know that one voice is only that — one voice. In reality, over 2,000 people signed my petition calling for the closure of the animal exhibit that had been the subject of controversy since 2005, when neighbors conducted a year-long protest against tethering ponies to a metal bar to force them to circle a tiny circumference for hours, shoeless on concrete, often in the sun.

The Fillmore animal vendors, Tawni Angel and Jason Nester, sued me for calling this institutional mistreatment abusive. Their lawyer, Mr. Chomiak, argues in his commentary that I have no First Amendment rights when a man with a badge or uniform, someone hired and paid by the City, publicly announces it’s not abusive to severely restrict an animal’s freedom at a City-hosted market.

If we accept this line of reasoning, then abolitionists should have been sued for speaking out against human slavery; opponents of child labor should have forfeited their homes for criticizing factory owners, and those who in the City of Santa Monica called cat de-clawing abusive, (before it was outlawed), should have been tried in court.

Nowhere in his commentary does Chomiak mention that local residents wrote letters to the editor denouncing the exhibits as abusive or that three other people signed legal declarations saying they rarely, if ever, saw the ponies offered water when circling for hours. In the only Santa Monica Animal Control report I could obtain under the Public Records Act, the animal control officer wrote that Ms. Angel did not give her ponies any rest during their 3.5 hours of circling because they rested back at the ranch.

What about the ranch? The USDA issued a scathing report on the animal vendors’ ranch in 2014, referencing “no area in the enclosures free of excreta” in the corral and barn, calling for more frequent cleanings “to prevent contamination of the animals, to minimize disease hazards,” and “bedding and fecal material observed in the trailer” that pulls up to Main Street in Santa Monica.

Additionally, the vendors operated for six months at our market without the required USDA license (93-C-1067) when it was “CANCELLED” and not renewed until a month after I launched my petition.

Mr. Chomiak wants to crucify me for viewing photographs of ponies with hooves that looked damaged — missing pieces, discoloration, and crumbling– and describing the hooves as cracked. His client, however, Tawni Angel, under penalty of perjury, describes the hooves as “chipped” and in need of trimming. To view Angel’s legal declaration, click here https://www.laprogressive.com/pony-rides-dispute.

Angel and Nester’s attorney then blasts me for being a Facebook friend with a council member and alludes to “cronyism” without ever mentioning that it was his clients who the City’s market managers allowed to operate for years without the contractually required animal permit and city-required business license. If we want to talk about cronyism, let’s talk about a decade of no-bid contracts that effectively barred open competition for the market’s prime real estate, while other vendors underwent rigorous examination. Cronyism? A California Public Records request produced an email showing market managers editing and distributing the animal vendors’ public release downplaying a neighbor’s concerns about animals in heat distress, insisting the animals were just “sunbathing.”

Angel and Nester’s lawyer devotes two paragraphs to his clients’ Facebook posts, objecting to my sharing these long-public posts with the City.  It wasn’t me, however, who posted “BORDERS: CLOSED!” “LANGUAGE: ENGLISH!  To be clear, it was Ms. Angel, not me, who was depicted in the Facebook post spraying bullets from a semi-automatic weapon, taking aim at a mock human paper torso, and concluding, “I like it.”

While people have a First Amendment right to demand the closure of borders and a legal right in California to shoot a semi-automatic weapon, I did not think these, nor the images of trapped and tethered animals, were appropriate images with which to brand our farmers market, particularly since Angel and Nester were promoted as virtual ambassadors to our Ocean Park neighborhood, stationed at the market entrance, greeting hundreds of thousands of visitors from all over the world.

A local resident has a right to inform City management when these are the vendors the City is promoting on its web site, albeit with a misleading photograph of a young girl sitting on an unshackled pony set against an ocean backdrop, a far cry from the tethered ponies circling round and round while the band plays on.

If residents were sued every time they communicated concerns to council members, our lawmakers would operate in an echo chamber because the people who elected them to govern would be too afraid to speak out about anything – from development to oil drilling to animal exploitation.

And that’s why this lawsuit is so chilling – and why I have taken my free speech case to the California Court of Appeal to have it dismissed as an assault on the First Amendment and the California Civil Code that affords certain protections to those petitioning their government.

Mr. Chomiak mentions support from market goers for the tethered pony ride, pointing to its so-called popularity as justification for continued animal servitude. For all we know, this was a calculated push-poll, with parents encouraged to scrawl unchecked times they wanted to keep the ponies circling. Market managers never surveyed those who boycott the market.

Ultimately, however, we all must search our cultural psyche to better understand the romantic infatuation with pony rides, which are often associated with the pioneering cowboy, the great defender and explorer of the American West, the wholesome outlaw who only cut an “Indian’s” throat when there was no other way to steal his land.

There’s nothing romantic about historical racism or the symbols of a false narrative.

There’s nothing cute about animal servitude in the name of amusement.

Our Santa Monica City Council had the courage and compassion to move in a new direction.

Free the ponies. Free our psyches.

Marcy Winograd is a public school teacher who launched a petition in March, 2014, to end “animal exploitation” at the Main Street Farmers Market. To view the petition, click here: http://petitions.moveon.org/sign/shut-down-pony-rides.

By mirrormmg May 13, 2015
in Opinion
Related Posts