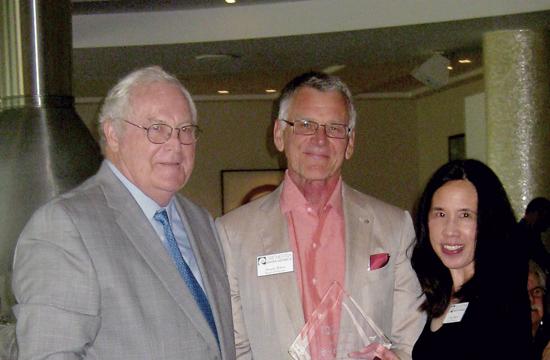 The award was presented to Holbrook by OSM President Cindy Bandel and Vice President Dennis White at a luncheon in his honor held at Loews Santa Monica Beach Hotel.

“Bob Holbrook is one of Santa Monica’s most distinguished public servants who has made tremendous contributions to the civic and cultural life of Santa Monica,” said Bandel. “As a key cultural organization in Santa Monica, OSM wanted to thank Bob for his dedication to the arts and the enrichment of Santa Monica as a community.”

The luncheon was followed by Orchestra Santa Monica’s final concert of the season at the Moss Theater. The near sell out audience enjoyed pieces by Brahms, Chevalier de Saint-George, Boccherini and Tchaikovsky featuring soloist Cécilia Tsan. oung players from Elemental Strings Chamber Orchestra joined OSM soloists in the St. George.