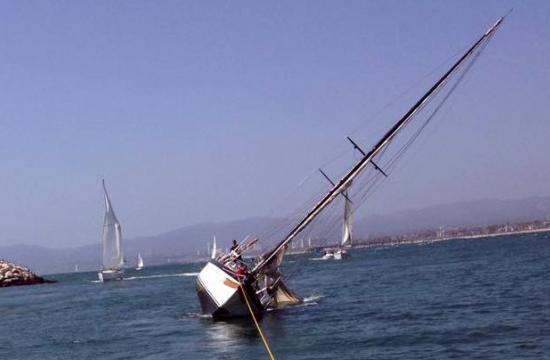 Rescue teams on Sunday afternoon aided a boat on its side in Venice and quickly afterward had to get to a wayward vessel in Dockweiler State Beach drifting close to the shore, fire officials said.

At about 3 p.m., BayWatch Santa Monica and BayWatch Del Rey were dispatched to a 45-foot sailboat knocked on its side and had its keel broken because of heavy winds, said Brian Hogue, a rescue boat captain with the Los Angeles County Fire Department.

Four people were on board and the captain at one point fell overboard, but was rescued, Hogue said.

There were no other injuries.

They had gotten as close as 100 feet from the pier, Hogue said.

Immediately after the rescue, BayWatch headed to Dockweiler in Play Del Rey to tie down a 1920s sailboat after its anchor was dislodged by heavy swells that in turn dragged the vessel within 30 yards of the beach, Hogue said.