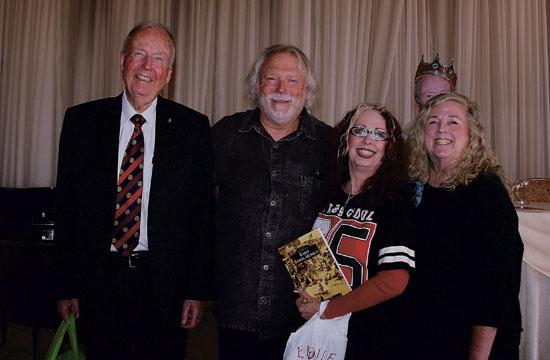 The Rotary Club of Santa Monica celebrated Staff Support Day on Friday, April 24, as several club members brought along guests deserving of appreciation. From co-workers to assistants, Riviera Country Club was bustling with additional colleagues and friends, all of whom became acquainted with the club during the meeting’s introductions.

After being greeted by Rotarians Eric London and Chris DeCarlo on their way in and listening to an invocation by Rosemary Regalbuto, Santa Monica club members and their guests collectively sang a rendition of “With a Little Help” by the Beatles in honor of the theme of friendship.

The meeting then proceeded to feature the guest speakers, who shared an unconventional presentation that fell in line with their careers.

As co-artistic directors of the Santa Monica Playhouse since the early 1970s, the married duo of Chris DeCarlo and Evelyn Rudie have a plethora of acting experiences under their belts, as they were actors as young children: Rudie was the youngest performer ever to receive an Emmy nomination at the age of five (after playing the first Eloise) and DeCarlo has performed in more than 10,000 performances.

Rudie and DeCarlo’s ease with the spotlight was apparent as they effortlessly took to the podium and spoke comfortably with the crowd.

“I’m told that this is the most rambunctious club organization in the country,” Rudie said. “If that is the case, then rather than Chris and I speaking at you and inspiring you to do something – you all seem like very inspired people already – I decided it’d be much more fun and inspirational if we do what Chris and I do best, which is create plays.”

Before leading the Rotarians into an activity based on the concept of the Ten Minute Play Festival – during which a performance is planned, scripted, and executed within a limited amount of time – Rudie explained the duo’s history and background.

Rudie and DeCarlo then grouped the Rotarians by where they were seated, asking them to choose a theme that was important to everyone at each respective table and using their bodies to express that subject matter.

After an afternoon of laughing out loud and letting loose, DeCarlo concluded the presentation by elaborating on why the concept of theatre is vital to human nature in general.

“The nature of theatre involves personal self-expression and true-versing the uncharted landscape of the human condition,” DeCarlo said. “After I got back from Vietnam, I wanted to do everything in my power to protect our humanity because war is not humane.”

Rudie and DeCarlo are founders of the Actors’ Repertory Theatre, American Cultural Youth Ambassadors, the Young Professionals’ Company, the Diversity-in-Education Scholarship Program, the New Playwrights Benefits Series, and the Senior OutReach Project. Together, they have created more than 500 plays and musicals for adults and youth alike.