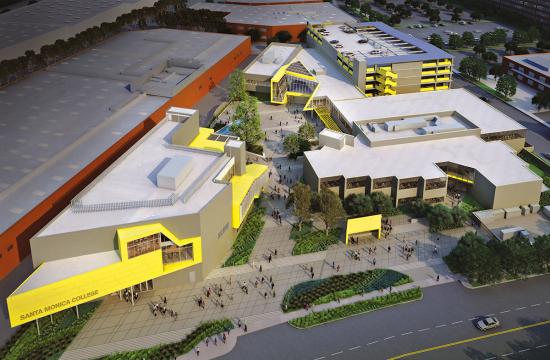 Santa Monica College has received final approval from the California Community Colleges Board of Governors to be part of a landmark pilot program allowing it to offer a Bachelor’s Degree in Interaction Design.

SMC and the two other colleges approved join 12 others that received final approval from the board in March.

“Community colleges are uniquely positioned to deal with the flexible and changing world,” said Governor Jerry Brown, who attended Monday’s board meeting and signed SB 850 sponsored by Sen. Marty Block (D-San Diego) which allowed up to 15 community college districts to offer bachelor’s degrees in a field of study not offered by the California State University or University of California. “I think we have to get a very broad sense of what higher education is – and higher education now is breaking free of the more traditional parameters, constraints and images.”

California Community Colleges Board President Geoffrey L. Baum called the move “a win for our students and our economy.”

“For us, this has been about our students first, and also about fulfilling our mission to create a competitive workforce to keep California on the economic cutting edge,” said SMC President Dr. Chui L. Tsang. “We are thrilled at the prospect of training our students for a career that pays well and will launch many of them into the middle class, while meeting a dire need in our tech industry.”

Only two private universities in California offer a bachelor’s level degree in interaction design, often referred to as “user experience design.” The programs at these two universities cost around $160,000 – the four-year degree at SMC would cost just over $10,000. Over 100 letters of support poured in to affirm the need for SMC’s degree from Los Angeles tech and entertainment companies including giants like Microsoft, Warner Brothers, Disney, Fox TV, Sony Pictures Entertainment and Amazon Web Services.

SMC Board of Trustees Chair Rob Rader called SMC’s bachelor’s degree “a natural choice” for a college that sits in the heart of Silicon Beach and the LA entertainment industry.

“This decision cements our place in the greater LA entertainment and tech industry,” said Rader, pointing out that SMC’s Interaction Design program will be housed in a design and media campus undergoing an $89 million redesign and slated for a spring 2016 opening. It will also be the new home of SMC’s public radio station KCRW 89.9 FM.

“This innovative curriculum will train students for 21st century jobs in the entertainment industry, Silicon Beach, and in any other enterprise where the public accesses information online,” said California State Senator Ben Allen. “I am proud of Santa Monica College for once again innovating to provide an excellent educational opportunity for students, and contributing to the strength of our regional economy.”

Assemblymember Richard Bloom who represents the college in the State Assembly echoed the sentiment.

“By being chosen as one of the fifteen community colleges around the state to offer a bachelor’s degree, Santa Monica College has again proved its distinctive place in higher education,” said Bloom. “By creating a degree that meets the needs of a fast-growing local industry, SMC will serve as a workforce pipeline and will have a positive impact on the tech industry and our economy.”

The legislation sunsets after the 2022-23 school year, after which the Legislature and Governor may renew it pending two Legislative Analyst’s Office reviews of the pilot program, in 2018 and another one in 2022.