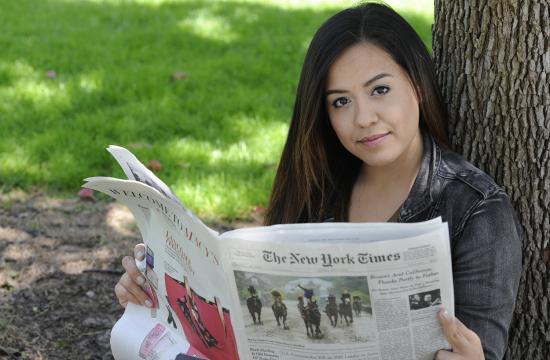 In “Swearing Off the Modern Man,” she takes a deliciously witty, stripped-down look at the contrasts and overlaps in modern and old-school approaches to dating, developing relationships, and simple communication.

“Jo’s voice really comes through in that essay, and so does her talent,” said SMC English instructor Joelle Adams. “I wasn’t aware that Jo was writing a piece for the contest, but I’m not surprised that she did, or that she placed as a finalist. She’s always stood out as a very engaged student, with insightful questions and comments. Jo has demonstrated determination and insight in all of her work for my classes.”

“This whole thing happened because I was browsing social media late one night, and saw a tweet about the Modern Love contest,” said Smith. “I thought, ‘Oh, wow! I have plenty of material to work from for this, and everything that hurts and is awful will be funny in time,’ so I decided to take the challenge.”

An art history major at SMC, Smith never expected to be selected as a finalist in the contest. “I’m really thrilled,” she said, “because this is the first piece I feel I’ve ever really finished.”

Smith works at the Hammer Museum, and her current favorite artist is British architect and designer Thomas Heatherwick. “But I love any type of creative expression,” she said, adding that her plans include incorporating acting back into her life.

Smith said she enrolled at SMC because “I’m shooting for UCLA, and this seemed like the best and fastest way to get there.” Her goal is to apply next fall for transfer in 2016 to continue her studies in art history at UCLA.

Smith’s essay – online at www.nytimes.com/2015/05/17/style/swearing-off-the-modern-man.html – was published under the headline “The Allure of an Old-School Romance” – in the Sunday national edition of the New York Times (page ST6) on May 17, 2015.

The Modern Love College Essay Contest – a feature of the New York Times Modern Love column dedicated to reader-submitted essays exploring the ups and downs of love – attracted works from almost 1,800 students from 489 colleges and universities nationwide, according to Daniel Jones, the column’s editor and the author of “Love Illuminated: Exploring Life’s Most Mystifying Subject (With the Help of 50,000 Strangers).”

Santa Monica College is a California Community College accredited by the Western Association of Schools and Colleges (WASC). Since 1929, SMC has provided educational opportunities and special events to the public, including a Literary Series of talks by authors each semester, and the twice-yearly publication of the acclaimed literary journal Santa Monica Review, edited by Andrew Tonkovich. SMC is the nation’s leader in transfers to the University of California.