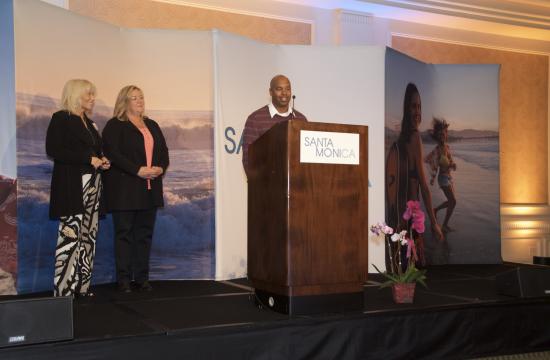 The event highlighted updates to the organization’s five-year strategic plan, the most recent report on Santa Monica’s visitor population, and the exciting launch of SMCVB’s entirely new SantaMonica.com website and destination brand refresh.

The report, which has been conducted annually since 1983 to track the positive impacts of tourism, provided important insights into Santa Monica’s visitor population and the economic impact to the city. In 2014, tourism injected $1.72 billion into the community, generating $56 million of lodging and sales tax revenues into the city’s general fund, a healthy seven percent rise from 2013.

“We are fortunate to live in such a sought-after destination. The funds generated by tourism in Santa Monica help support essential city services,” said Mayor Kevin McKeown. “The level of services our city is able to provide in our schools, parks, public transportation, police and fire departments stem from a healthy economy, where tourism plays a significant role.”

The report also highlighted that Santa Monica tourism now supports 13,700 local jobs that cannot be exported, up 6.2 percent from the previous year, and indicated that the occupancy and daily rates at Santa Monica hotels are some of the strongest in the region.

“Our charge is simple: To help maintain economic vitality and services in our city,” Kerns announced. “The figures revealed here today clearly indicate that, two years into our five-year strategic plan, we are harnessing our destination’s ability to generate the critical tourism jobs and dollars required to be a true economic engine for the city.”

Learn more about the economic value of tourism at http://www.santamonica.com/about-smcvb/economic-value-of-tourism/.

The refresh includes: an entirely revamped SantaMonica.com with a new hotel booking portal and responsive design, a redesigned logo, and a new official visitor guide and map, brand style guide, and destination photography.

“We are very proud to bring this new approach to the Santa Monica brand, and look forward to seeing how it will better serve our visitors, local businesses and community partners,” Kerns added.

During the Summit, Kerns and Laurel Rosen, president/CEO of the Santa Monica Chamber of Commerce, presented Downtown Santa Monica Ambassador Derek Davis with the Thelma Parks Tourism Spirit Award for his exceptional service in the hospitality and tourism industry.

The Downtown Santa Monica Ambassador since 2013 noted, “I work with good people and good customers at a company that values morals, integrity and cares about people.”

Davis was awarded a $500 scholarship and a two-day trip to Las Vegas, provided by SMCVB and the Santa Monica Chamber of Commerce.

To learn more about the Thelma Parks Tourism Spirit Award and to submit nominations, visit www.santamonica.com/spiritaward.