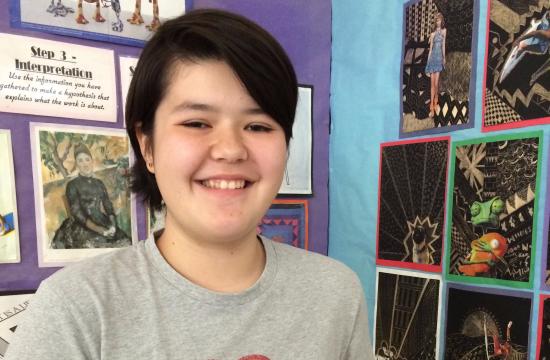 Artwork and microgravity experiments created by Santa Monica-Malibu Unified School District students will take a journey to the International Space Station and back after being selected as regional winners of the Mission 7 Student Spaceflights Experiments Program (SSEP) competition, which seeks to inspire a new generation of American scientists.

“The SSEP brilliantly ties together three of our most exceptional academic programs – STEM, English language arts and visual arts,” SMMUSD Superintendent Sandra Lyon said. “How exciting it is to know that our own creations are traveling beyond our planet; congratulations to all who participated.”

The SSEP is a space initiative overseen by the National Center for Earth and Space Science Education (NCESSE). The competition has two components – one focusing on real science and one encouraging artistic design. The estimated Mission 7 launch date is June 13.

Among those who will be holding their breath before the liftoff will be Meyer, whose winning patch shows smiling people holding hands around a spaceship to signify teamwork; and Boardman, whose patch shows a rocket blasting off into the deep blue horizon, simulating the creative process.

“Through collaboration, innovation and hard work, we can reach new heights together and build a better future on Earth and beyond,” Boardman said of her winning design.

The real science experiment competition is more of an interdisciplinary weave of science, technology, engineering and mathematics (STEM) curriculum and written communication skills. Lincoln science instructors realized during the SSEP 2012 Mission 2 competition that for the Lincoln eighth-grade teams, the science came easily; the language skills less so.

“Too often, science and English get disconnected,” Lincoln Middle School science instructor Marianna O’Brien said. “We want our students to become proficient in both, and also to channel their creative side.”

The school recruited LMS English instructors Gretchen McLaughlin, Susan Stivers and Joe Montanez to aid in fusing the two subjects, making the competition part of the STEM and English class curriculum. Students discovered a greater appreciation for the experiment process, leading to a much more rigorous contest.

When the Mission 7 astronauts return from the space station, the students will learn the results of their experiment, and the patches will be returned to the schools.

Though the SSEP education initiative is exceedingly popular at Lincoln, it is not free. The NCESSE provides research materials, at a cost of $21,500. To pay for this, the teacher team supported by principal Dr. Suzanne Webb enlisted several sources: $7,000 from Lincoln’s Santa Monica-Malibu Education Foundation Stretch Grant, $5,000 from the California Space Grant Consortium, $1,000 from District STEM funds, and $8,500 from the Lincoln PTSA.

“We greatly appreciate the generous contributions from our District stakeholders who allow our students to participate in such a magnificent educational experience,” Lyon said.