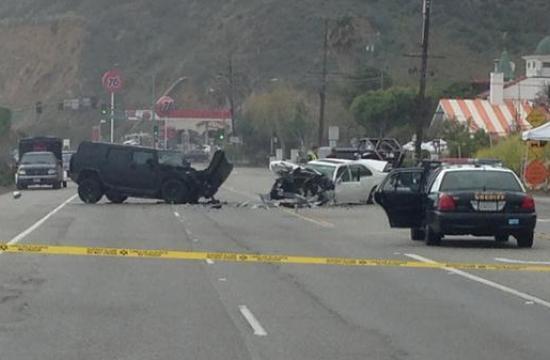 The stepchildren of a Calabasas woman who died in a multi-car collision involving Bruce Jenner in Malibu filed a wrongful-death lawsuit Friday against the former Olympic champion who says he has long suffered from gender confusion and now identifies as a woman.

There was no immediate comment from a spokesman for Jenner.

Jenner has not been cited or charged in connection with the crash, which remains under investigation by the Los Angeles County Sheriff’s Department. The former Olympian has made headlines in recent months for his transition from male to female, which he confirmed in a recent ABC interview.

Shortly after the Malibu crash, authorities said Howe’s Lexus crashed into a black Toyota Prius whose driver had slowed or stopped several hundred feet before the PCH traffic signal at Corral Canyon Road for unknown reasons.

The 1976 Olympic decathlon gold medalist’s Cadillac Escalade, hauling an off-road vehicle on a trailer, then rear-ended the Lexus, which pushed the sedan into the path of an oncoming Hummer SUV.

Three other adults and two children were injured in the crash.