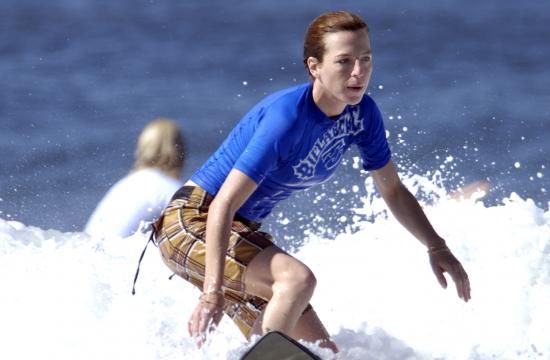 Santa Monica actress Tanna Frederick has become a mainstay of the Los Angeles theatre community, but when she’s not on stage she’s busy doing her part to save the planet.

As an avid surfer, actress, writer, producer, and environmentalist, Frederick founded Project Save Our Surf in 2008 and works tirelessly to bring the entertainment and surfing industries together in support of clean oceans.

Its mission is to help in the conservation of oceans, fresh water, and the delicate marine ecosystems that reside therein.

It all came about almost a decade ago when she began to notice how dirty the ocean was and how much trash was polluting the water.

“I started getting sick,” Frederick said. “When you look at the ocean from the beach you don’t notice it until you get out in the water and you start becoming best friends with your ear, nose, and throat doctor. I started becoming aware that when it rains the urban runoff and the drainage from the sewerage systems is a major problem. To me, I really started to notice and see how the surfers were kind of the stewards of the oceans and how they knew what was up. I learned a lot from the native surfers who have been out there surfing since age four. They knew a lot about their ocean and its problems with pollution.”

She said her Iowa roots had given her a strong appreciation for the environment, and she came up with an idea for a fundraiser.

“In the Midwest there’s things called Polar Bear Surfs,” she said. “It’s basically 85-year-old men and it usually involves them drinking heavily before they cut a hole in the ice in the middle of winter where it’s 30 below, and these men go out there and they jump into the water. They do this every year and they completely love it.”

Frederick decided she wanted to bring a similar concept to Santa Monica where people would jump into the ocean in the middle of winter.

The idea would be that people would go out in the ocean without wetsuits, and their donations for taking part would go to a number of environmental non-profits.

“I called up the surf legend Shaun Tomson out of the blue,” Frederick recalled. “I phoned him and said ‘I’m Tanna and I’m from Iowa, what do you think about hosting a Polar Bear Surf with me.’ I don’t know why he said yes to me because he’s an incredibly respected South African surfer who is a former world champion who is just absolutely incredible. Ever since that day he’s been a part of my organization.”

While the idea of the Polar Bear Surf never quite got off the ground, Project Save Our Surf did and it has evolved tremendously.

“In two years we’ve sent 5,000 local underprivileged kids to camp and we also help provide clean water in different countries around the world,” she said. “We have two camps that we work with – one in the mountains and one on the beach. We pay for kids in 4th and 5th grade who I really believe are our future; especially the underprivileged kids whose schools can’t afford educational programs and field trips.”

The program, called Camp PSOS, exposes the youth to the wetlands and wilderness using fun, hands-on projects. The hope is to not only engage campers on environmental issues, but to instill in them the desire to fight for positive environmental change.

Camp PSOS is administered by Inside the Outdoors, an organization with nearly 40 years of experience empowering students, teachers, and communities to connect with the nature. Through storytelling and live animal and science labs, they bring science concepts to life and serve more than 125,000 California students each year.

Project Save Our Surf also pay for youth to take part in a local surf camp.

“We’ve been doing these camps so long but I cry every time,” Frederick said. “These kids will run back into the water and you’ll see the teenage instructors trying to keep up with them. These kids are amazing. They have their own problems and issues to deal with, but once you get them in the water they’ll kick everybody’s butt. The smiles on their faces are unparallel and unbeatable.”

While Project Save Our Surf’s initial focus was on education and cleaning up oceans, it expanded its fight for clean water to include something that should never be a luxury – access to safe water.

Frederick said a single $50 water filter can provide clean water to a village of 100 for an entire year.

She said they send these filters to countries all around the world.

“We have a well and orphanage with children who have AIDS in Johannesburg,” she said. “We also have an orphanage in Vietnam, which we’re going back to in September. I’m running three marathons this year to help raise money. I already ran in the L.A. Marathon and raised $3,000.”

While California’s drought continues, she said water scarcity in the U.S. is nothing compared to conditions in poorer countries.

“There are these villages with orphaned kids and there’s only one river where they get all their water from; they go to the bathroom in the water, and they do their cooking and cleaning in the water. We have taken filters there because they have women who teach the younger ones and try to keep them off the streets, away from drug and sex trafficking. One water filter is $50 and it gets 100 kids water for a year. It’s kind of like a no-brainer. It’s really crazy how inexpensive some of these filtration systems really are.”

Project Save Our Surf continually hosts events like beach clean-ups and fundraisers throughout the year. It also accepts donations to keep its programs running.