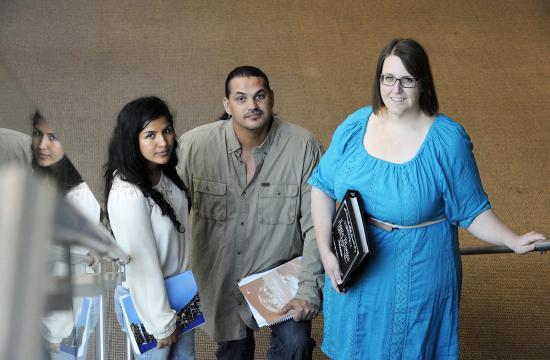 Dakota Black’s life was plagued by tragic events. Genesis Garcia thought her dream of going to UC Berkeley was laughable. Caitlin Corker was a struggling student with a 1.9 GPA who wished she could go to UCLA. On June 16 – amid loud applause and vuvuzelas – Black, Corker and Garcia will be among thousands of students who will graduate from Santa Monica College.

After witnessing the suicide of his brother and losing two uncles to suicide, Black became what he calls “a very, very angry man” and ended up in prison for four years on a felony. After getting out of prison, he became a commercial diver.

“My plan was to hide in the ocean,” says Black, a member of the Blackfeet tribe. With encouragement from friends – he is a self-confessed ‘goofball’ – he made a foray into standup comedy, something that would become a healing process. He has also since appeared as a character actor in TV shows like Drunk History and Justified, and films including Low Down with Elle Fanning and Glenn Close.

Black decided to come to SMC to take a few classes because he was $1,000 short of a helicopter pilot’s license, and he planned on setting aside some of his financial aid money for the license. He enrolled in a general psychology class with SMC professor Laura Guild because it fit into his schedule.

“Professor Guild opened my eyes and made me realize that I can make a difference,” says Black. Subsequently, he decided to major in psychology and help those dealing with suicide or suicidal thoughts.

“Look at me!” laughs Black, who is also a proud father to his 10-year-old daughter, Jada. “I was freshly out of prison a few years back, and here I am doing the right thing.” He now volunteers on the suicide hotline and with several suicide prevention organizations. While he has not found an exact vocation – teaching or counseling are at the top of the list – Black knows that he wants to save lives, and let people know they matter. He volunteers on Native American reservations in several states and is part of a team working on a documentary about suicide on reservations.

Black was accepted into his top choice, California State University, Fullerton, where he will major in psychology. Future plans include a Doctor of Psychology degree.

“When they’re standing over my casket, I want them to say, ‘He made a difference’ – really, in any community that deals with suicide, but especially within my own,” says Black.

Genesis Garcia and her father were in a car accident in their native Guatemala when she was one. He died and she lived. At the age of 11, Garcia would journey to Los Angeles to join her mother who had immigrated earlier. Shortly after being reunited, Garcia’s mother was also killed in a car accident, leaving her in the care of an uncle who was not able to support her financially.

In middle and high school, Garcia spoke very little English and it was a struggle for her to understand much, but she poured herself into academics.

“I ended up graduating high school with a 4.0 GPA,” Garcia recalls. “Even though there was no one to celebrate with me, I liked it – I was doing it for me.” An AB 540 student, she thought that was the end of the road for her, but two days after she graduated from high school, President Obama announced the DREAM Act, which would allow qualifying undocumented students like Garcia who arrived in the U.S. as children to receive state financial aid at public four-year institutions in California.

In her first semester at SMC, a counselor asked Garcia to write down where she would like to transfer, and she wrote “UC Berkeley,” as a joke. The counselor told her that her dream could be a reality. Garcia had a 3.9 GPA, and when the time came, she was encouraged to apply.

When that acceptance email came from UC Berkeley, Garcia admits she “freaked out.” She will be majoring in sociology and wants to be an immigration lawyer.

Caitlin Corker came from a broken home and struggled with grades so low in high school that she could not even attend the graduation ceremony. She then attended Humboldt State University, where she continued to struggle, holding a 1.9 GPA. She hung on to a hope that she could attend her dream school – UCLA – and finally came to SMC, which transfers more students to UCLA than any other community college in California.

“I worked my butt off,” says Corker. She wiped her academic slate clean, retaking all her classes, and got heavily involved on campus, eventually becoming vice president of the Associated Students.

Corker also participated in a research-driven SMC initiative called GRIT (Growth, Resilience, Integrity and Tenacity) to help students who want to develop “non-cognitive skills” – the ability to persevere despite challenges and failures – along with the skills they need to succeed in the classroom. She helped organize activities like You Plus One, a coaching program that provides first-generation students with mentors.

Corker will be transferring to her dream university UCLA this fall, where she will major in political science. She hopes to come back and work at Santa Monica College.

To read more about these three students, and for other stories, visit www.smc.edu/graduationstories.