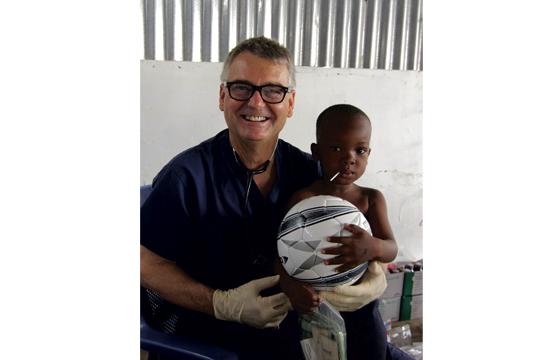 He was in Tanzania to treat African children with cancer, malaria, burns, swollen lymph nodes, abscessed teeth and cerebral palsy, among other afflictions.

From consultations to treatment to medication, the services are all free of charge.

Hamilton, or as many affectionately call him “Dr. Bob,” has gone to Africa 22 times in the last 17 years as coordinator for Lighthouse Medical Missions, a bi-annual short-term medical mission that sends volunteer doctors, nurses and assistants to clinics in mostly African villages.

Since he returned from Tanzania in March, Hamilton and others have been organizing the seventh annual Walk to Africa, a Santa Monica walk-a-thon that raises the bulk of money for Lighthouse Medical Missions’ overseas clinics.

On Saturday, May 16, at 8 am, hundreds of people will start at Crescent Bay Park, 2000 Ocean Ave., for an eight-mile trek along Santa Monica streets and parks.

The idea, Hamilton said, is that if 1,000 people walk eight miles, they will have trekked the distance from here to Africa.

“We’re blessed in America, we have an abundance, we have so much and we have so much to be thankful for,” Hamilton said. “We can make a tangible difference in the lives of real people. That’s an important thing. We’re right there with the people.”

Along with the eight-mile athletic walk is a four-mile intermediary and two-mile children’s walk.

“It is scenic, it is green, it is healthy, it is the beach, it is Santa Monica, it is springtime,” Hamilton said.

Along the routes will be water stations sponsored by countries where Lighthouse Medical Missions has held clinics, like Sierra Leone, Liberia and The Gambia. And at the Family Fun Zone, Los Angeles-based kid’s band, Twinkle Time, is set to perform.

“This is a family event,” said Patricia Peterson, the fundraising administrative arm for Lighthouse Medical Mission. She has been involved with every facet of Walk to Africa, from promotion to finding corporate sponsorship to securing donors for the goody bags (which this year includes gifts like t-shirts, Cliff Bars and compression socks).

Peterson, who’s been to Africa twice, stressed the importance of what Walk to Africa does for Lighthouse Medical Mission and the African people they touch.

“Where there’s a need, there’s a way to get there,” Peterson said.

Since 1988, Lighthouse Medical Missions has brought over 500 Americans to Africa, given medical care to over 50,000 people and raised over half a million dollars to do so.

But the walk-a-thon isn’t the only way Lighthouse Medical Missions has raised money in the past.

One volunteer, Cherry Ying, sophomore at Pacifica Christian High School, was captured by Hamilton and others’ work in Africa after listening to a presentation the doctor gave at her school last year.

She went back to China that summer and started a fundraiser on the streets with her friends to raise money for the cause, unbeknown to Hamilton. They sold hand-drawn T-shirt and hat designs, stuffed animals and toys and raised about 2,000 yuan, or $300.

She explained that in China, the focus of charity is on rural, impoverished villages in their own country and not outside of there.

“In my first year I came here and I saw, ‘Wow there’s this whole [other] world, people in Africa,’” Ying said in Hamilton’s pediatric office, where she goes after school to shadow him. “A lot of people need help.”

And the team doesn’t stop at medical services – they build schools and churches, often because they need a place to house the clinic.

Santa Monica-local Johnny Huerta, 26, traveled with the 28-person team this year to Tanzania and got to witness first-hand the work Lighthouse Medical Missions did on the ground.

Huerta, whose family owns the Gilbert’s El Indio restaurant, is a relatively new member of the Lighthouse church on 20th and Wilshire Blvd. Like Patricia Peterson, while he didn’t provide medical aid, he was still able to help the staff and patients alike. He also served as the team’s unofficial photographer, chronicling the six-day trip.

“One of the things that was very powerful throughout this trip was how we continually prayed throughout the trip for the patients and for our own strength to take on the workload that was in front of us,” Huerta said.

He helped dole out pills at the makeshift pharmacy and escorted patients from doctor to doctor. After, Huerta would bring people to the “prayer station.”

“Keeping Jesus at the center was key,” he said. “It was amazing to watch the power of Christ and medication working together.”

Individual or team walkers can still register for $35 online at walktoafrica.dojiggy.com. Sponsors and donations can also be made there.

“We will take everything that people want to give, like omnivores,” Hamilton said.