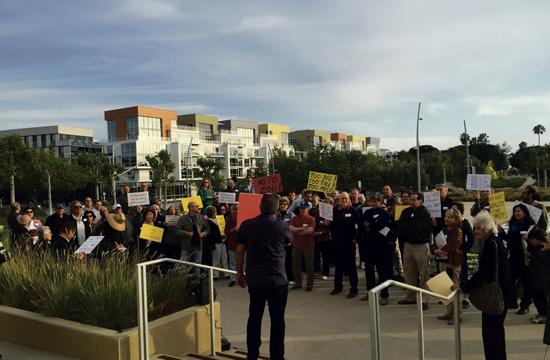 A speaker trying to address the crowd through a megaphone could only get a couple of words in before the crowd would again erupt in shouts of their mantra.

This set the stage for what would be an exhaustive, marathon first reading of an ordinance to repeal the existing zoning ordinance and add a new zoning ordinance, to repeal existing land use and zoning related provisions and add new land use and zoning related provisions, and to repeal the existing official districting map and adopt the final official districting map and resolution to approve land use and circulation element (LUCE) amendments, and resolution to approve LUCE land use designation map amendments – simply referred to as the ZOU and LUCE.

After hours of discussion and voting on specific amendments, the Council gave further direction for staff to revise another more finalized resolution for vote this Tuesday, May 12.

Approximately 60 people addressed the Council, the majority of those focusing on the debate surrounding the Tier 3 Amendment of the ZOU: those who supported the repeal of Tier 3 and those who did not support the repeal. Tier 3 would have allowed for taller and denser developments along mixed-use boulevards such as Wilshire.

However, the repeal of the Tier 3 amendment was just one part of a larger package resolution that had to be voted on by Council as a whole.

“The votes may be different after three weeks so I want to talk through them and see if there are any changes in how we vote,” said Mayor Kevin McKeown.

There were four LUCE amendments that were subject to the repeal and seven other that council gave direction on and all were bundled together as one resolution.

“The LUCE amendments and LUCE map resolutions will ultimately be done by one resolution, which will be the formal act that you are taking, but it is certainly fine for Council to look at certain amendments and decide if we can remove or add accordingly, which we are ready to do for you tonight,” said staff attorney.

As expected, the repeal of Tier 3 was long and contentious, with council members talking at length on their respective opinions.

“I oppose the elimination of Tier 3 on Wilshire and Santa Monica Blvd.,” said Councilwoman Gleam Davis. “And I think that this is something that is a difficult thing for a city that clearly has a housing shortage, and I just don’t understand why we are not erring on the side of creating housing.

“Tier 3 is a tool in the toolbox, an option to get what I think and thought we wanted to get on Wilshire. I don’t support commercial buildings on Wilshire, but residential.”

Councilwoman Sue Himmelrich was in favor of supporting the repeal, in favor of focusing on the revitalization of buildings already here.

The Council voted 4 to 3 in favor of supporting the repeal, removing the Tier 3 designation.

An initial motion failed to keep housing-unit averages at 1.5 persons, citing that that would not allow for enough three-bedroom units.

This motion was passed with a 6 to 1 vote, citing that it would give more freedom to designers and allow for affordable housing and family units, a main concern of the Council.

It turned out that finishing the ZOU and LUCE in one night was too big, too tall and too much of a task for one night, even a very long one.

“So council, the bars closed an hour ago, and we have now totally missed Cinco de Mayo tonight,” said Mayor McKeown. “There are details left to be addressed on May 12, but we have covered a phenomenal amount of ground and done an amazing amount of work tonight. I really congratulate everyone on their endurance here. We will obviously not be taking a motion to introduce on first reading because we have to wait for staff to come back with some rewriting but we will be able to do that on May 12.”

This was followed by a 6 to 0 unanimous vote by the council to continue the discussion on May 12.