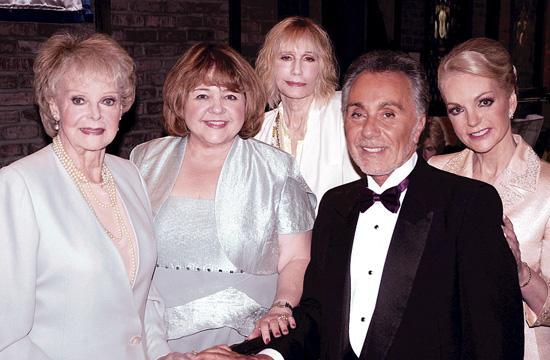 Since the 1960s, June Lockhart has been widely recognized as the practical and protective TV mom from “Lost in Space” and “Lassie.” But her extensive career stretched beyond zany aliens and courageous canines. Her body of work includes some 200 stage, film, and TV roles – including two seasons on “Petticoat Junction” and numerous television guest-starring appearances since the 1950s. Westerns were among her favorites.

“I worked in many early TV westerns,” said Lockhart, a longtime Santa Monica resident, who turns 90 on June 25. “I loved the period costumes with the long gowns and their cinched in waists. The stories were also marvelously written and could be quite provocative for their time.”

In ‘The Sarah Drummond Story,’ a 1958 “Wagon Train” episode, her character gives birth to an Indian child after being raped.

“The husband wants nothing to do with the baby, so it’s a very emotional and thought provoking episode,” noted Lockhart. “This was also a time when pregnant women on network TV series were shown like they were always only three months pregnant. But I was huge!”

The same year, her character in a “Gunsmoke” episode (‘Dirt’) probably also challenged the censors. “I played a hooker and wore a very low-cut dress, which was interesting since they just didn’t show a lot of cleavage on TV in those days.”

In two episodes of “Have Gun will Travel,” set after the Civil War, Lockhart plays a physician confronting prejudice towards female doctors.

“Women doctors were certainly not common back then, or even in the 1950s when the show aired,” she said. “My first husband and his sister were doctors and, despite excellent grades, her admittance to medical school was held up because the nuns at her upscale girl’s school delayed forwarding her records. They claimed ‘Our graduates don’t go to medical school!’ This was in the late 1940s, but she turned out to be a great doctor and the one I went to – not my husband!”

Lockhart revisited the same theme in 1970, with a rural comic twist, as Dr. Janet Craig in her first “Petticoat Junction” episode.

The story focused on the town’s men, led by Edgar Buchanan (Uncle Joe), who attempted to sabotage Dr. Craig’s medical practice. By contrast, the cast were most welcoming to Ms. Lockhart, who joined the series following the death of popular Bea Benaderet – the show’s matriarch (Kate Bradley) for 175 episodes.

“On the first day, I walked onto the set and called out ‘Good morning everybody!’ and they returned the greeting. We knew everything would be fine. They had done their grieving over the loss of Bea and knew we had to get straight to work.”

“He was quite a dear, but very naughty. He would tell the filthiest jokes right up until the cameras started rolling, so one had to compose oneself before the scene started. He had originally been a dentist which always amused me because he had the worst teeth!”

Lockhart’s first professional acting appearance occurred when she was 8 years old at New York’s Metropolitan Opera House in a pantomime scene in the opera “Peter Ibbetson.”

“I was a ballet student at the Met and also danced in several operas with the corps de ballet,” she recalled.

Her film career began in 1938 as a child actor working alongside her parents (Gene and Kathleen Lockhart) in “A Christmas Carol.” She went on to appear in other classics such as “Meet Me in St. Louis” and “Sergeant York” – some 40 feature films in all.

“I had seen the play on Broadway and was impressed with the actress (Patricia Benoit) who played the wife’s role. I happened to be on the studio lot when Richard Widmark and the director, Karl Malden, were planning the film version and they walked by. They said ‘June, we’re doing Time Limit, do you want to play the wife?’ Of course I said yes.”

Lockhart says there was talk her performance might lead to an Academy Award nomination.

“But the character was never brought back in the film to tie up her role,” she explained. “So my name was never submitted. However, I knew I had done a good job.”

Despite the Oscar absence, Lockhart’s trophy shelf isn’t exactly bare and includes a 1947 Tony Award and NASA’s prestigious Exceptional Public Achievement Medal awarded for her support and promotion of the space agency following her “Lost in Space” days.

As she looks back on nine decades of acting, Lockhart also celebrates a milestone birthday with the classic ‘60s sci-fi series – the first episode aired 50 years ago this year and will be commemorated with the release of the complete series on Blu-ray in September.

But she also looks forward to new projects, including her most recent role as a grandmother in the independent film, “The Remake,” currently in post-production.

“June was a total delight to work with and plays a wonderful ‘spunky’ character,” said co-director/producer and writer Lynne Alana Delaney. “She’s an amazing little fireball of energy, even after a 12-hour day on set!”

And even on her June 25 birthday, Lockhart will be working when she introduces Gary Greene and his Big Band of Barristers at the Beverly Cañon Gardens, in Beverly Hills.

“I’ve had many opportunities that just dropped into my lap over the years and I’m glad I was equal to them,” she says. “I used to think 90, gosh, that’s old. But I feel 55. I’m very fortunate to still be active and working.”

Nick Thomas teaches at Auburn University at Montgomery, Ala., and has written features, columns, and interviews for more than 600 magazines and newspapers.