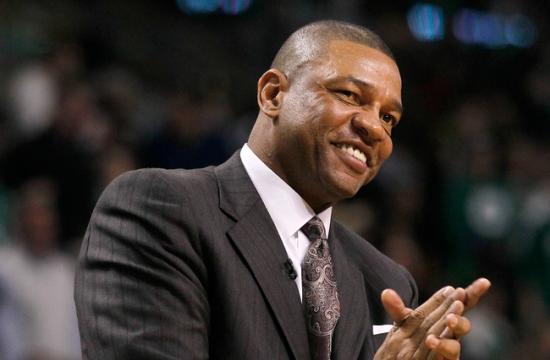 The Los Angeles Clippers will have owner Steve Ballmer, coach Doc Rivers and present and past players distribute T-shirts with the team’s new look at 32 locations today, including Santa Monica.

Ballmer will be giving away T-shirts and cupcakes at Sprinkles Cupcakes in downtown Los Angeles from 10-10:45 a.m.

Street teams will also make unscheduled stops throughout the area, according to Seth Burton, the team’s vice president of communications.

The team unveiled its new uniforms and logo Wednesday, part of the effort to distance itself from former owner Donald Sterling.

The Clippers’ white home jersey will feature the new Clippers wordmark across the front.

Their red road jerseys will feature the LAC monogram. Additional alternate black jerseys will be introduced at a later date.

The primary logo retains the red, white and blue colors of the past logo and adds black “to provide a modern edge,” the team announced.

The curved lines in the primary Clippers wordmark symbolize the horizon of the ocean as seen from the bridge of a Clipper ship, alluding to the team’s nautical theme roots, which began when it moved to San Diego in 1978 from Buffalo, New York.

The silver lining in the wordmark signifies the renewed collective optimism of the fans of the team which has never advanced to a conference final in its 45-season history, but reached the conference semifinals each of the past two seasons.

The new uniforms and logo were unveiled by Ballmer in an appearance on the TBS late-night talk show “Conan.””

We have introduced a new look that is bold, edgy, powerful and truly representative of us turning the page and entering a brand new age,” Ballmer said.

Ballmer purchased the team last year for $2 billion from the Sterling Family Trust after the release of secretly recorded conversations involving Sterling and companion V. Stiviano in which Sterling criticized Stiviano for having her picture taken with black people and telling her not to bring them to Clippers games.