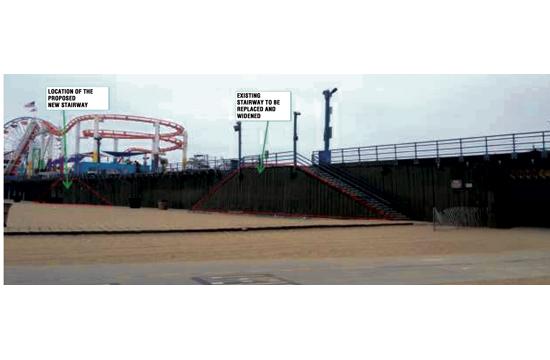 Santa Monica City Council approved a handful of consent calendar items at its Tuesday night meeting, including new stairs from the Pier to the beach, footwear for certain City employees, and an agreement to continue broadcasting City Council meetings on KCRW. As these items generally do not need any discussion or debate, City Council typically approves all these items together without discussion or individual motions.

Council approved the Pier South Upgrade Project that will construct new wooden stairs west of the existing south side pier stairway, including reconstruction and widening of the existing stairway to increase the emergency exit capacity of the Pier, which had been deemed inadequate.

Santa Monica Fire and Police Department staff has expressed concerns about the limited capacity of the narrow stairway, placing emphasis on its inadequacy for supporting large numbers of people in the event of an emergency. The proposed project would increase the current emergency exist capacity south of the Pier fourfold, according to staff.

The project will not be completed by this year’s busy summer months when the Pier stairways are most used, however.

Construction work will begin mid-September of this year for a period of approximately four months, with the anticipated completion date some time in January of 2016.

The project will cost around $526,900 and will be completed by RSB Group, Inc., according to staff.

The City of Santa Monica will purchase new shoes replica watches or boots for staff in positions that require specialized footwear for safety reasons, or as part of a uniform.

Industrial Shoe Company and Shoetera will provide the safety work boots, shoes, and other accessories in an amount not to exceed $96,364 for one year, with two additional one-year renewal options with a potential annual manufacture’s increase of 5 percent, coming to a total three-year agreement not to exceed $303,789.

The City came to an agreement with Santa Monica Community College District (SMCCD) to continue providing live broadcasts of regular City Council meetings from 8 pm to midnight on 89.9 FM KCRW, who has been in partnership with the City for more than 20 years.

The current contract includes the broadcast of two regular City Council meetings on the second and fourth Tuesday of the month from 8 pm to midnight.

The only other radio station in Santa Monica is KSRM AM 1680, but its sole function is for traffic and transit-related updates.