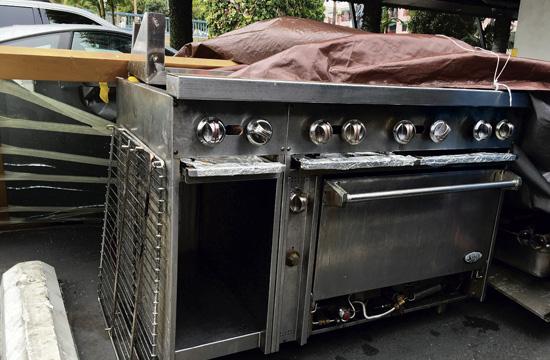 Walking into The Lobster restaurant, past the full bar and into the dining area that overlooks the Santa Monica Pier, it’s almost impossible to notice the area where a fire in the kitchen spread to a booth early Saturday morning.

A white sheet temporarily covered the area earlier this week, the only visible reminder of the incident.

The Lobster, a fresh seafood restaurant off Ocean Avenue next to the mouth of the Santa Monica Pier,reopened Monday after a two-day closure.

The fire is believed to have sprouted from a kitchen stove and leaped the wall it shared with a booth on the other side, catching the booth afire and  splintering its glass headboard mounted on the wall.

The fire lasted from 6:13 am to 6:33 am before the restaurant’s sprinkler system put out the short-lived flames.

“We are still under investigation,” said Lynne Thomas, Marketing Director and Director of Community Events at The Lobster, “but as of now we believe that it was a heat fire that fortunately only sparked the booth.”

The restaurant’s cleaning crew was the first to notice the fire Saturday morning, immediately reporting it to the Santa Monica Fire Department, who shortly thereafter arrived on the scene,spraying a fire extinguisher that killed the dying embers.

“We were very happy it wasn’t worse and very happy no one was hurt,” Thomas said.

Both the stove and the booth were removed earlier this week. The Fire Department is investigating how the fire started.

The incident closed the Lobster for two days while they fixed up the damage and charred areas.

“We were closed Saturday and all day Sunday,” said Thomas.“We were pretty much working around the clock to try and get open again…and reopened Monday.

“It was hard because so many people had reservations. It was graduation weekend and it was really sad for us not to be able to reopen. We were doing what we could to get open as soon as we could,” she said.