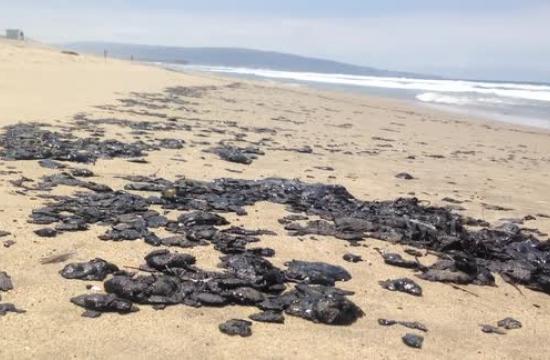 Now that the oil fingerprinting analyses have been authenticated, Heal the Bay, Surfrider Foundation, and California Coastal Protection Network are calling on regulators to assign responsibility and secure proper compensation for the environmental damages caused by the Plains All American Refugio Oil Spill throughout Southern California.

The California Department of Fish and Wildlife’s Office of Spill Prevention and Response (OSPR) collected samples from the oil that washed ashore in Manhattan Beach on May 27, 2015.

Physical and chemical analyses conducted by OSPR and an independent peer review indicted that the oil in the South Bay matched a source sample taken from the Plains All American Refugio Oil Spill.

Although Santa Barbara has taken the hardest blow, the spill’s impacts are being felt throughout Southern California.

Heal the Bay and Surfrider Foundation are calling for steadfast action to aid in the oil spill response efforts and enforcement against Plains All American.

— Document full extent of the oil’s reach. Surfrider Foundation and Heal the Bay are working with authorities to see that all unusual sightings of oil that have been reported on beaches outside of Santa Barbara since the spill are being investigated. Since the initial report of oil on South Bay beaches on May 27, oiled beach reports have come in from Oxnard, Leo Carrillo State Beach, El Matador, Zuma Beach, Surfrider, Sunset surf spot, Santa Monica, Venice, the entire South Bay, Long Beach, San Clemente and Laguna Beach. Long Beach and 7 miles of South Bay beaches experienced closures, all during unfortunate timing at the beginning of peak summer season. We encourage the public to remain vigilant about reporting unusual tar sightings in the future. Abnormal amounts of oil should be reported to the National Response Center: 1-800-424-8802.

— Hold the polluter responsible. It is critical that Plains All American be held responsible for fouled beaches, oiled wildlife, and damaged habitats from Santa Barbara to the southernmost reach of their oil pollution. Surfrider Foundation and Heal the Bay are working with authorities to see that the documentation of the Plains All American Oil Spill is comprehensive so that strong enforcement action can be taken by state and federal agencies against this polluter.

— Protect our coast by passing new oil regulations. A coalition of environmental NGOs are calling for passage of key legislation to improve oil spill response and management in California. SB 414 (Jackson) would help make oil spill response faster, more effective, and more environmentally friendly by creating a program for fishing vessels to voluntarily join in oil spill response and place a temporary moratorium on the use of dispersants within state waters. And, SB 788 (McGuire) would close the loophole in state legislation that allows for oil and gas extraction in state-owned submerged lands in the California Coastal Sanctuary if those lands are being drained from producing wells upon adjacent federal lands, in particular it would protect Santa Barbara’s marine protected areas from offshore oil drilling. AB 864 will require an operator of an oil pipeline along environmentally and ecologically sensitive areas near the coast to use the best available technology to reduce the amount of oil released in an oil spill in order to protect state waters and wildlife. This includes automatic shut off technology, and requires a pipeline operator to document the best available technology used in their oil spill contingency plan.