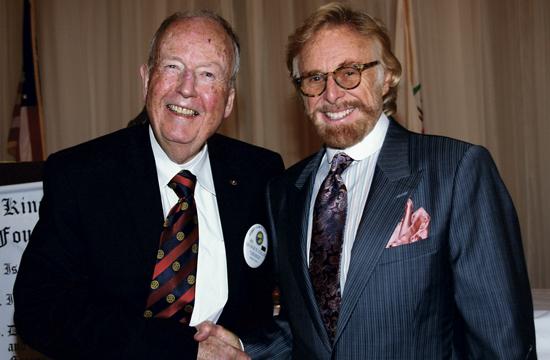 Last Friday, businessman Greg Chapman spoke to Santa Monica Rotarians at their weekly meeting about dressing for success, his business slogan that has earned him millions of dollars and countless clientele success stories, some of which he recounted.

“The Atlantic Magazine says that the familiar phrase dressing for success may be more than just a cliché,” Chapman said, recounting an article he had read in The Atlantic Magazine. “If you sacrifice the T-shirt and jeans, it improves peoples ability to think abstractly and focus on the big picture. People are testing higher, 50 percent higher, when they are dressed in suits. Some of my clients buy their children suits to take tests in and their self-image skyrockets.”

Backed by statistics, Chapman explained to Rotarians how this cliché still in fact rings true today, even in our culture of jeans-and-a-T-shirt tech millionaires.

While living in Bombay, India in the late 1960s, Chapman had some suits made which gave him a look of success like he had never seen before. Although he didn’t realize it at the time, he said, he had stumbled on the authentic, now nearly extinct, approach to custom tailoring as the British had taught it to the Indians and the Chinese, when they colonized their countries.

It was that experience in India that set him on his path to success, bringing that tailed suit style to the U.S.

“I’ve made over $100 million in custom clothes…to thousands of people,” he continued. “I could stand up here for a week and tell you the most incredible success stories when people listen, pay attention, and practice it.”

Chapman told a story of a group of researchers who looked at how people interact differently with someone who is dressed up.

The group hired an actor and had him dress up in sordid and raggedy clothes to test to see how people reacted to him on the subway. He lay down for 20 minutes as if hurt or injured and no one on the subway helped him – they instead filed by in droves on their way to different destinations.

The group then did the experiment again, but this time the actor was dressed in a suit. It received a completely different reaction. Once he hit the ground he had five or six people helping him up and calling for an ambulance.

This, as Chapman suggested, reveals the power of “dressing for success,” not the now accustomed mistreatment and disregard of the homeless.

The suit – the way the man was dressed – was what commanded the crowds’ attention.

“A completely different reaction happens depending on how you dress,” remarks Chapman. “If you move towards what you want to be and you use clothing, which is an incredibly powerful tool, it will move you in the direction you want to go…we move towards that which we can visualize ourselves becoming.”