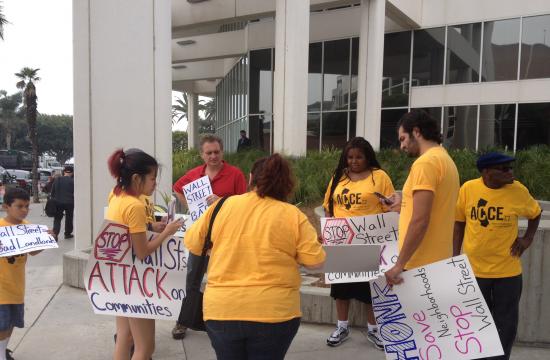 Dressed in bright shirts and waving picket signs, a group of housing advocates held a rally Tuesday morning in Santa Monica outside the offices of private equity company Blackstone.

The group was made up of mainly South Los Angeles residents outside 1299 Ocean Ave., protesting the alleged selling of properties in their neighborhood to Wall Street hedge funds and private equity firms.

Members from the Los Angeles branch of Alliance of California Community Empowerment, or ACCE for short, were behind the rally.

ACCE is a multi-racial, democratic, non-profit community organization building power in low to moderate-income neighborhoods to stand and fight for social, economic, and racial justice.

The group arrived at Blackstone’s offices at 11:30 am wearing bright yellow shirts and cartoony signs with clever protest slogans. Among the group was ACCE member Gisele Mata, along with her young son and other homeowners and supporters of the cause from all walks of life, from college students to geriatrics.

But they weren’t there for a protest. They were there to deliver a letter, urging Blackstone and companies similar to them to “be good neighbors” and “work to preserve homeownership and provide quality, affordable rental housing.”

“We are very concerned about how you and your related organizations manage rental units and handle delinquent mortgages,” the letter read. “Our communities have been tremendously harmed by the housing crisis, and we are working to rebuild. We need companies like yours to be good neighbors and work to preserve homeownership and provide quality, affordable rental housing.”

To date, your record is not good, the letter continued.

However, delivering the letter proved to be a challenge, as the security guard stopped them at the front door. After a few minutes of haggling back and forth to get the guard to deliver their envelope, they gave up. Knowing that the guard would probably not actually deliver the letter, they decided to take to the streets with their signs.

Mata said homeowners in their South Los Angeles community have been devastated by Blackstone buying up properties.

She said the company has purchased pools of mortgages from the U.S. Department of Home and Urban Development (HUD) and Federal Housing Administration (FHA).

“These pools are then flipped for profit,” Mata said. “No consideration is being given to the current homeowner.”

In the United States, the firm has become the largest owner of single-family rental homes in the country.

One of the members at the rally held a map showing all of the properties that Blackstone and companies like it had control over.

Much like a teenager’s face at the height of puberty, it was covered in red dots.

“They are scooping up large portions of LA County and surrounding cities,” Mata said. “We feel that this is irresponsible of our government to continue to sell the American dream out. We want responsible landlords.”

Ultimately, protests are slated to continue.

Blackstone’s Santa Monica office declined to comment on the rally.