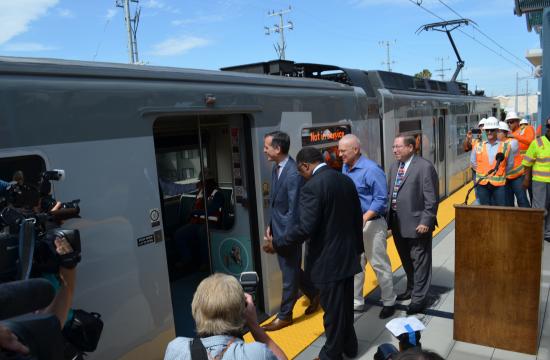 The Metro Expo Line extension from Culver City to Santa Monica is about 90 percent complete and on track to open by spring 2016, connecting downtown Los Angeles to the beach in a route Los Angeles Mayor Eric Garcetti on Monday called “from Grand to the sand.”

Garcetti was joined Monday morning by L.A. County Supervisor Mark Ridley-Thomas and L.A. Councilmembers Mike Bonin and Paul Koretz at a preview of the first stop as part of Phase 2 of the Expo line extension project in the Palms area at National and Palms Ave.

The station, which will be open in the spring of 2016, is an important stop on the project, which Garcetti has prioritized in recent years as head of the Metro Board. The first phase of the Expo Line began service between downtown Los Angeles and Culver City in the spring of 2012, and carries about 30,000 daily riders.

Phase 2, now 90 percent complete as well as on time and on budget, will add Santa Monica to the line, and is projected to carry up to 64,000 people by 2030. The new line will encompass a 6.6-mile corridor, with seven new stations and three parking facilities offering approximately 570 parking spaces.

At Monday’s preview, elected officials emphasized the progress and hard work put into the nearly finished station. A fully functional test-train also pulled into the station, and allowed for photo opportunities before departing.

“The Expo Line Phase 2 will offer thousands of riders the option to travel between downtown Los Angeles and Santa Monica without needing a car,” Garcetti told the assembled crowd and media. “The region’s newest rail line will add another transportation route while relieving traffic and reducing greenhouse gas emissions in the process.”

Garcetti and the other elected officials present also thanked Skansa-Rados Joint Venture (SRJV), the contractor for the project, for making impressive progress on Phase 2 in around 600 workdays, recently achieving more than one million work hours without a single lost time incident due to injury.

In his speech to the crowd, Councilmember Koretz gave particular notice to safety precautions taken by the project, which will include safety presentations to local schools, libraries, and other community groups, as well as “safety tours” at the Metro Headquarters building. Extra care is also being input to make sure that pedestrians, cyclists, and other civilians do not try to cross the tracks and use designated crosswalks at all times.

Garcetti and Ridley-Thomas praised the creation of almost 3,000 jobs for the project, and SRJV’s exceeding of local hiring commitments, crediting local communities for almost 50 percent of the project’s craft hours. Two thirds of the 300 small businesses employed in the project have been local.

After talking about Expo Line Phase 2’s impressive progress, Garcetti discussed the ongoing testing of the line, which will continue over the coming months with “plans to turn the new line over to Metro in the fall” for pre-revenue operation.

The test train then arrived at the station to much applause, and attendees were able to explore the very modern car, even sit in its seats and take pictures inside.

The event ended with Garcetti’s reaffirmation of the project’s goal: to reduce traffic and greenhouse emissions from vehicles, and more than that to provide an easy, cheap, and quick way to travel across Los Angeles.