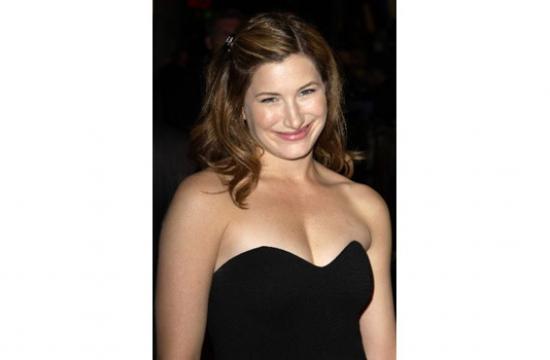 Kathryn Hahn can either make you laugh or cry, as she is equally at home in comedic or dramatic roles. She is also equally at home on stage, screen, or television, having performed in all those genres. She recently had a role in This Is Where I Leave You where she played a woman desperate to get pregnant. In her personal life, she’s managed to do that twice. She is married to Ethan Sandler and has two children: her son Leonard and her daughter Mae.

Among Hahn’s screen credits are: Revolutionary Road, Our Idiot Brother, Afternoon Delight, The Secret Life of Walter Mitty, Bad Words, She’s Funny That Way, and Tomorrowland. Some of her television credits include appearances on: Hung, Mad Love, Girls, The Newsroom, Transparent, Parks and Recreation, and her latest Happish airing on HBO. She made her Broadway debut in “Boeing-Boeing” and appeared in “Dead End” at the Ahmanson Theater, as well as plays at various regional theatres.

Hahn recently sat down with a select group of journalists to discuss her latest film, The D Train. Written and directed by Jarrad Paul and Andrew Mogel, she co-stars with Jack Black and James Marsden, with Jeffrey Tambor in a supporting role. Briefly, the story revolves around two main characters – a loser by the name of Dan Landsman, (Black,) and a popular former high school classmate, Oliver Lawless (James Marsden.) The reunion committee, of which Landsman is chairman, is having trouble selling tickets. He comes up with the idea of inviting Lawless, who he thinks is a Hollywood star. It’s this determination that sets into motion a series of lies and deceptions that get him deeper and deeper into a dark pit from which escape is getting harder and harder. Although this is billed as a comedy, and it is very funny, it’s really a dramedy, as both of these characters are deeply flawed and make for strange bedfellows. Hahn plays Landsman’s wife Stacey, the grounding force in his life.

This role is different from roles you’ve played before so what did you like about your character?

Kathryn: Very rarely am I the grounding or the anchor character, so it was refreshing. I really liked her goodness. I was interested in the mystery of her and   investigating why she stayed with her husband. She met him high school but

I don’t think he was on her radar. But ultimately, she considered him a good and decent person. As the years have gone on, the dark cloud over him has gotten bigger and bigger and darker and darker. Being a nurturer and a classic enabler, she’s pulled him up continuously. She is the grown-up and the parent to their three children.

How much rehearsal time did you have?

Kathryn: Like a minute and a half. It was luxurious. (Laughter) It was a short shoot and it all came together incredibly fast. I think Tambor (Jeffrey) and I were the last to sign on and we started shooting ten days later. We had a couple of good conversations with the directors, a couple of good meals, and then we dove in.

How was it working with two directors?

Kathryn: I was really impressed with Jarrad and Andrew finding themselves as directors during the making of the movie. It was really exciting to see the birth of two directors.

We had a hilarious time with Jack and James. How was it on the set?

Kathryn: They are hilarious, but actually there wasn’t a lot of room to screw around. We just got down to business. There are some scripts that call for fluffing out the comedy edges by improvising a little bit around it, but with the time we had, we knew it would be better spent in trying to get into the whys of these people. So instead of trying to make it funny, we made it as real as possible.

Have you gone to any class reunions?

Kathryn: I went to my 10th year high school reunion. I attended an all-girls Catholic school in Cleveland, Ohio. I’m still very good friends with a couple of the ladies from my class, but reunions are nightmares. Like no matter how well you’re doing in your real life, or not well, I feel that reunions are so fertile for story telling because it’s a place of re-invention. You can decide what you want to show of yourself and what you’ve become. You know it’s an idealized version of yourself.   Ultimately, you walk into that gym or wherever you are, and you literally become your fifteen-year-old self again. I don’t know anyone who’s had a great reunion experience that wasn’t wasted. (Laughter)

Were your classmates in awe of you because of your career?

Kathryn: Ten years ago I was a different bird. A lot of the people that I went to high school with still live in Cleveland and live rich, amazing lives. You look at all your alternative selves – like it was awesome to see some pals of mine who have huge families and live in these big, gorgeous houses with woods in the back and their kids walk to school. And you think that sounds like an awesome life. You see these alternate views of what you could be.

Who were you in high school?

Kathryn: I worked hard in high school and got good grades – not that I remember anything. I kind of tap-danced between different groups. I was liked by a lot of people, and skirted between the nerds and drama and art groups. I did everything but sports. Try as I may, I was never an athlete. (Laughter)

Was there an advantage going to an all-girls school?

There was something about going to a single sex school that was really valuable for me, and I think for a lot of young women. We didn’t have to worry about our clothes and you weren’t afraid to raise your hand. Being smart was not seen as “not cool.” So, I was very grateful for that.

What’s your most pleasant memory starting out as an actor?

Kathryn: It was at the Cleveland Playhouse, a beautiful, romantic regional theatre that unfortunately has folded. I saw A Child’s Christmas in Wales, and remember being very moved by it.   There was a tiny black box* called the Drury. I would take classes there. It was called the “curtain pullers.” It was my happy place. If I think of my beginnings, I think of this little stage. An empty theatre is the most beautiful image in my mind. It has possibilities – creating something out of nothing.

Do you have a specific technique or do you use different acting tools for different characters?

Kathryn: It’s different tools for different things. But, it’s always a question of what do you want and what are you trying to get in a scene. If that is happening, then you know you are listening and receiving. I’m not an improviser out of thin air. I always have to gird myself with a history. I have to know who the Replica Watches uk person is as well as I can so I have a point of view. I do a back-story as specifically as I can so then I can pull from that when I’m in a scene. So much is about listening and about who your scene partner is. It’s always better to act with someone who is better than you.

What is your biggest struggle in combining your roles of mother, wife, and career?

Kathryn: When I’m with my children, it’s very hard to not be thinking about my gig. I try to be present when I’m with them so that they know they have 100% of me. But, you never feel satisfied. It’s like Sisyphus – you know one thing happens and then the boulder rolls down again. I am crazy grateful that I get to do what I love and I’m very excited that both of my children get to see their mom do what she loves. My kids are five and eight. We were at a circus this morning.   My daughter juggled one ball back and forth. Just kind of threw it from one hand to the other. (Laughter)

What are you working on now?

Kathryn: My show, Happyish, with Steve Coogan, has premiered on HBO. I’m also starting the second season of Transparent. I’m also doing a couple of movies – Tomorrowland, and a Peter Bogdanovich movie called She’s Funny That Way. This is the fun stuff.  I get to put make-up on, get dressed, and go to the Four Seasons for an afternoon with journalists.

How was it working with Bogdanovich?

Kathryn: It was as dreamy as you could possibly imagine. He’s a genius and one in a million, and he still always wears his cravat. It was the hottest summer in New York City. He would dunk his cravat in a bucket of ice water and then put it on. Just to do an old-school farce was such a pleasure for all of us improvising comedians.

So in “Tomorrowland” you got to play with all the toys and George Clooney?

Kathryn:   You know, I wish I did get to play with the toy that is George Clooney. (Laughter) We had no scenes together, but we do share an IMBD page,** which I’m very excited about. (Laughter)