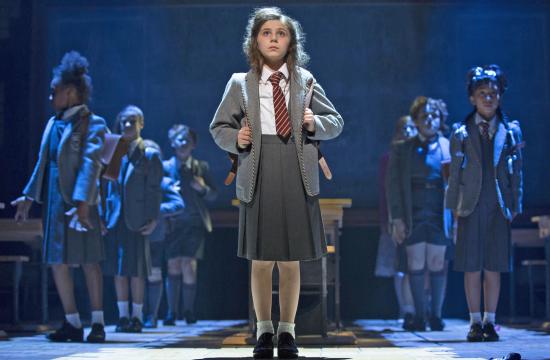 The national touring company production of Matilda, The Musical is basically a giant piece of cotton candy that once consumed, will leave a sugary aftertaste in your mouth. The story revolves around the main character of Matilda, played on opening night by a tiny tot of a young lady named Mia Sinclair Jenness.*

Originally produced by the Royal Shakespeare Company, the musical version is based on a book by Roald Dahl. Matilda is the five-year-old heroine of this fable. She is a precocious bookworm who is able to read Dostoevsky in Russian, no less, and develops super powers along the way.

Her parents, Mr. and Mrs. Wormwood, are played by Quinn Mattfeld as the double-digit IQ dad, and a most strident Cassie Silva, as the mom, whose only interest is to participate in a ballroom dance contest. They ridicule their daughter for always reading a book and wonder where they failed as parents to install good qualities in her, such as watching a lot of television.

Her father always refers to her as “boy” and she responds, “I’m a girl.” They also have a son, Michael, played by Danny Tieger. He is their favorite because, well, he’s quite stupid. In a desperate attempt to get her on the “right” path, they decide to send her to a private school.

We are now introduced to Miss Trunchbull, the head mistress of the school, a woman of dubious sexual identity. The school’s motto is “Bambinatum est Maggitum,” or “Children are Maggots.” This role is played by Bryce Ryness, who under the direction of Matthew Warchus, gives a buffoonish, over-the-top, played for cheap laughs, schtick-heavy performance, which I have to admit, was an audience pleaser. So, the narrative takes us through the life and difficult times of this determined young lady, as experienced at home and at school.

Under Warchus’ direction, most of the adult characters are cartoon, cardboard cutouts pandering to the lowest common intellectual denominator.replica watches There are two exceptions to the lack of real characterizations. The first is a most talented Jennifer Blood who plays Miss Honey, Matilda’s very sympathetic teacher. She sings one of the many musical numbers, the touching “My House.” The other “real” character is the librarian, Mrs. Phelps, very well played by Ora Jones.  Phelps is fascinated by Matilda’s story-telling ability, and encourages her to keep reading books.

Besides the leading characters, there are dozens of singers and dancers played by a versatile ensemble of young children, augmented by older actors. They brilliantly executed extremely complex dance routines and gymnastics as choreographed by Peter Darling, and sung their hearts out to the overwritten music and lyrics by Tim Minchin. Some of the productions numbers included; “Miracle,” “The Chokey Chant,” “Bruce,” “When I Grow Up,” “Revolting Children,” all performed by the Company, and “The Smell of Rebellion,” performed by Miss Trunchbull, Miss Honey, and the children.

With regard to the tiny Miss Jenness, what is most fascinating about her performance is the amount of dialogue she has memorized from the over-written book by Dennis Kelly, as well as all the musical numbers she performed – all without one misstep. She deserves great praise just for those accomplishments. That said, ‘tis a pity that due to her English accent, most of the dialogue was not distinguishable and the same thing was true in her musical numbers, during which she sang her little heart out. Her stage presence is excellent and her acting does leap over the footlights. Miss Jenness is a talent to be reckoned with, and in the hands of the right director, she will undoubtedly deliver a top-notch, fully realized performance.

What is really the star of this production is the dazzling set design by Rob Howell. Using children’s ABC building blocks as the theme, he created splendid, colorful set pieces that were gracefully reshaped and repositioned for the different scenes. Howell also designed the outstanding costumes, adding to the storybook look of the production. Enhancing the set is Hugh Vanstone’s luscious light design, which drenched the stage in a kaleidoscope of changing candy-colored patterns, occasionally blanketing the audience in red, white, or blue lights, along with a unexpected confetti shower.

*The role of Matilda is rotated between two other performers – Gabby Gutierrez and Mabel Tyler.