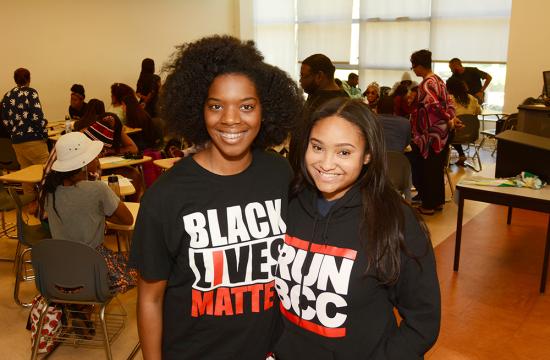 1989 marked the beginning of the end of apartheid in South Africa, and at Santa Monica College, other revolutionary things were happening. The idea of a special program was born, which would provide smaller classes taught by phenomenal instructors with a focus on African-American culture where possible.

This would be backed up by a “tough love” support system to empower students while pushing them to grow. That program – called Black Collegians – turns 25 this year.

Haley Coleman moved from Temecula to attend SMC two years ago. The self-confessed “shy, small-town girl” has morphed into a confident student leader who organizes campus events as president of the Black Collegians student club, and has attended intense summer research residencies at Loyola Marymount University and UCLA with other SMC students.

She plans on a career in film and television, and is transferring from SMC to the University of Southern California this fall as a communication major.

“I don’t know where I would be without Black Collegians,” says Coleman, recalling how counselors would push her “just at the right time,” seeing her as a leader when she herself did not, and how Black Collegians faculty leader Sherri Bradford became “Mama B”: a mom away from home.

“We are the second family, the mentors, the mothers, the fathers, the sisters,” says Bradford. “There is a support system waiting for you when you get here.”

“I know it’s true here at SMC from direct experience,” says Doucet who teaches English classes set aside for students enrolled in the Black Collegians program. What he does in these classes is the same thing he does in all his classes: prepare his students so that they will not be overwhelmed when they transfer to a four-year college or university.

The only difference is something he calls “cultural familiarity,” ensuring that the students in the program – who are largely African-American – find themselves represented in the material.

Muriel Walker Waugh is a chemistry professor at SMC who teaches Black Collegians classes and also for the SMC Science and Research Initiative’s STEM (Science, Technology, Engineering and Math) program.

This spring, she helped organize a number of weekend “boot camps” where Black Collegians and other students spend all day going over math and chemistry skills so that they can have a higher chance of succeeding in her introductory general chemistry class.

“I’m an African-American female from Southern Shreveport, Louisiana… I had to teach myself,” said Waugh. “If I can do it, you can do it.”

Aurelia Rhymer is a Science, Technology, Engineering, and Mathematics (STEM) major at SMC majoring in biology – she wants to be a pediatrician.

“This is where I grew up,” says Rhymer. Growing up meant starting over with prerequisites like precalculus and getting a “reality check” from professors who reminded her that she was now a college student who needed to be an adult and ask for help if it was needed.

“I grew emotionally and personally,” Rhymer adds. “I was too proud to ask for help but I knew that I needed to find a program to help me succeed.” That’s why she joined Black Collegians, which led her to join the STEM program and become a leader in the Black Collegians club.

Rhymer was recently selected by the SMC Foundation to serve an eight-week Dale Ride Internship in Washington, D.C. this summer at the office of Congresswoman Janice Hahn, U.S. Representative from California’s 44th congressional district, and also at international humanitarian agency CARE (Cooperative for Assistance and Relief Everywhere) USA.

Rhymer has some advice for fellow students who may think themselves incapable of fulfilling their dreams.

“First, don’t give up. Just because you suck at certain things doesn’t mean you can’t do whatever it is,” she says, offering her struggle with and conquest of math as an example. “Everyone struggles…work harder and build a community for yourself.”

To find out more about the Black Collegians program at SMC, contact Sherri Bradford at Bradford_Sherri@smc.edu or call 310.434.3635. Details are also available at www.smc.edu/studentservices/blackcollegians.