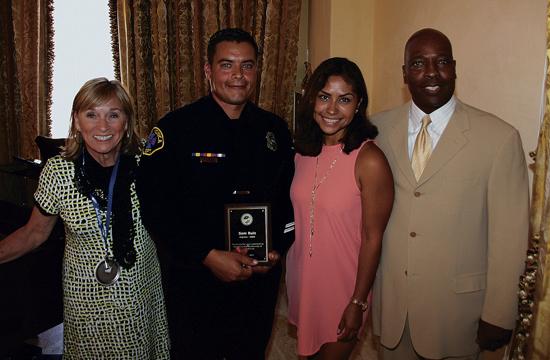 The Rotary Club of Santa Monica held its Public Service Recognition Day last Friday, a day when Rotary thanks and honors the “organizations in Santa Monica that make it such a special place to live.”

There were three presentations: one for the Fire Department, Police Department, and Big Blue Bus. Each of the organizations selected a member within their organization to be honored at Rotary for their distinguishable work.

Mitchell said Ruiz had strong dedication to the community and, most notably, those less fortunate in the community.

Ruiz has served on the Fire Department’s holiday gift exchange for 12 out of the 13 years he has been with the Department. In the program, said Mitchell, members of the Department select families in Santa Monica “who are struggling and give ‘em a hand. We give gifts and turkey, ham, everything we can to support ‘em during the holiday season.”

Growing up, Ruiz’s family, like those he now helps, was in need of a helping hand. As a child, his parents would take him early one morning during the holiday season to the same sort of donation centers Ruiz now works at. His parents would wait in line for the doors to open and then one would quickly wake up the sleeping children in the car to join them in line.

After working at the Fire Department serving at the same centers he as a child visited, Ruiz realized that it was people like himself who had helped his family those many years ago.

Since then, he has been serving every holiday season for the last 12 years, in “hopes that every year some kid will feel the same way he did and continue to do this in their communities and possibly do it when they grow up.”

Next to be honored was Lead Public Safety Systems Analyst Eric Uller of the Police Department.

“We are an organization of about 460 employees, 228 vehicles, and a budget soon to be $83 million,” said Deputy Chief of Police

Al Venegas, who introduced Uller. “Eric oversees much of that in terms of technology and systems for our organization.”

The final person of the afternoon to be honored was the Big Blue Bus’ Transit Planning Administrator, Tim McCormick.

“Unlike Fire Fighter Ruiz, I did not finish at the top of my class. Unlike Eric, I don’t conduct my activities without complaint,” began McCormick humorously. “As a good Irishman, I am deeply attached to my complaints.”

He then quickly switched gears, going into a story about why he is in the field he’s in, one that at his first job he had doubts about.

“I got to the point where I wondered whether or not I was in the right field. I was up in the middle of the night and this was up in the East Coast where it rains. So it was raining, and I was driving down the road and saw one of my new bus shelters all lit up, coming up on the left. I looked at the shelter and there was a women with an infant,” he said, trying to hold back tears. “And she wasn’t out in the pouring rain. And I said that’s the gift. That’s the gift of public service.”

“That’s is why we do it,” said McCormick, finishing his speech and highlighting why the afternoon was so important. “We do it because we have the opportunity to make a huge difference in someone’s life and not everybody gets that gift everyday.”