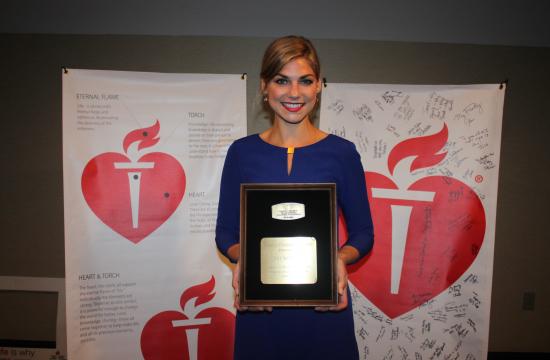 The award, which was presented in a dinner ceremony held in Los Angeles June 8, is one of the top honors given to volunteers in the affiliate, which serves a 10-state region comprised of Alaska, Arizona, California, Hawaii, Idaho, Montana, Nevada, Oregon, Utah and Washington.

Winkler was recognized for her major contributions to raising awareness of stroke and the F.A.S.T. warning signs through a comprehensive stroke awareness campaign that covered community, media and social media outreach.

As a volunteer and advocate for stroke awareness, Winkler used her story to spread the message that stroke can strike anyone at any age and that it is crucial to know the warning signs and act fast.

She engaged her station ABC7 to broaden her reach through story features, public service announcements and a stroke awareness phone bank which gave more than 200 viewers the opportunity to speak with stroke experts. omega replica watches Winkler also shared her story at community events and media interviews.

“Having Bri as the face and voice of stroke awareness here in LA has taken our stroke awareness campaign to greater heights,” said Kathy Rogers, executive vice president for the American Heart Association/American Stroke Association’s Western States Affiliate. “These efforts made an immeasurable impact on our fight against stroke and allowed us the opportunity to reach a greater number of people with our lifesaving message.”

Winkler, a resident of Santa Monica, was 24 years old when she suffered a stroke nearly three years ago. She was getting ready for a spin class when she lost hearing in her right ear and felt numbness on her face, right arm and leg. Although she wouldn’t realize it until later, the right side of her face began drooping, too. She did not know it at the time, but she was having a stroke.

Winkler joined forces with the ASA shortly after her health scare to educate the public about the acronym F.A.S.T., which stands for the classic stroke warning signs and the action that one needs to take at the first sign of symptoms. F is for Face Drooping, A- Arm Weakness, S – Speech Difficulty and T – Time to call 9-1-1.

The ABC7 meteorologist has been a volunteer for two years and was recently appointed as a member of the AHA/ASA Western States Affiliate Board of Directors. She also serves on the association’s WSA Stroke Task Force.

To learn about volunteer opportunities in Los Angeles, visit www.heart.org/losangeles or call 213.291.7000.