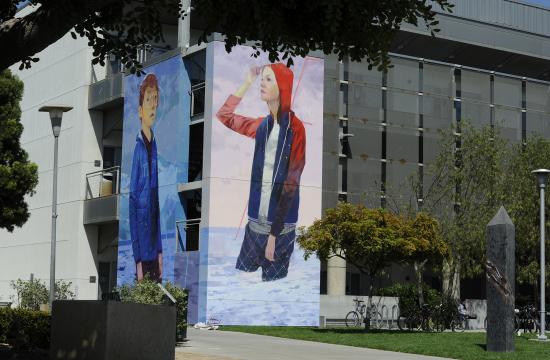 Renowned muralist and Santa Monica College alum Andrew Hem returned to donate an artistic tribute to the place that helped him hone his craft. On adjoining walls of the SMC Science building – located on the east side of SMC’s main campus at 1900 Pico Boulevard – are two tall murals: one of a girl standing in an ocean with a hoodie pulled over her head, and around the corner, one of a boy in a snowy mountain setting.

“It stands for me and my sister – we haven’t seen each other in a while,” says Hem. “The ocean scene is a nod to Santa Monica beach, and the mountains represent Big Bear.” On the amorphous nature of his characters’ features, Hem said it was a deliberate choice – he did not want viewers to look at the mural and see a person of a particular race.

“How wonderful it is to grace our campus with a major piece of public art created by one of our accomplished alumni,” said SMC President Dr. Chui L. Tsang. “Even more, we are grateful that he donated his work to show his appreciation for SMC helping him achieve his dreams.”

Born during his parents’ flight from Cambodia in the wake of the Khmer Rouge genocide, Hem grew up balancing two cultures: the rural animistic society of his Khmer ancestors, and the dynamic urban arts of the tough Los Angeles neighborhood where his family eventually came to live.

Fascinated by graffiti at an early age, he honed his skills with graphics and composition on the walls of the city before following his passion to SMC – where he took his first figure drawing class – and went on to obtain a B.F.A. degree in Illustration from Art Center College of Design in Pasadena.

“It was an easy transition for me. Before that I only did graffiti, and I mainly did lettering,” says Hem, explaining why he decided to focus his education on fine art. “It was easy for me to change to figure drawing because of the shapes and cylinders in graffiti.” Hem credits several SMC art professors – particularly artist and SMC instructor Marc Trujillo, a Guggenheim Fellowship recipient – for helping him hone his craft.

“I’m both proud of Andrew and gratified to have such a significant piece by Andrew become a part of my daily life on campus,” said Trujillo. “He’s what you hope for when you’re teaching and exemplifies what SMC is striving to foster, both as a person and in his work: a kind, thoughtful, generous citizen of the world.”

Hem works in gouache, oil, and acrylic, and his haunting impressions of culture and landscape evoke the life of the spirit through the visionary manifestation of memories and dreams.

Hem was one of 10 artists to be invited to the White House for a celebration of American Art. He will also be recognized as one of two distinguished alumni at SMC’s annual graduation ceremony on June 16, along with Dr. Nathan Myhrvold who was named by Foreign Policy magazine to its list of top 100 global thinkers and was the co-founder of Intellectual Ventures after retiring as chief strategist and chief technology officer of Microsoft Corporation.