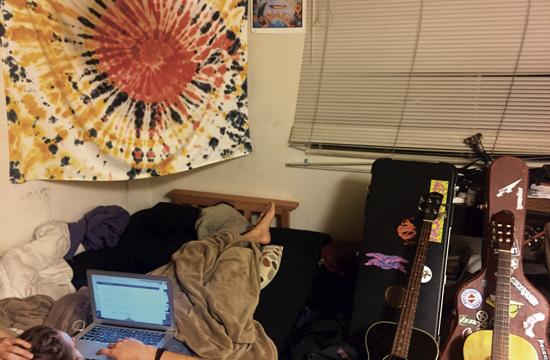 He walked a couple of steps from his bed to the refrigerator, stepping over an acoustic guitar that lay on the floor. The refrigerator was crowded, a couple of half empty milk cartons, various Trader Joe’s salads, and pots of beans, rice, and some vegan dishes. He stretched his arm into the back of the refrigerator and, after a moment, found his carton of milk. He examined the expiration date. Satisfied, he poured the milk into a bowl and followed by some granola.

He put the milk back, the refrigerator door rattling closed, and took another few steps, unconsciously stepping over the guitar, and went back to his bed next to the refrigerator.

“When you’re hungry, it’s not so bad of a walk,” said Brett Rowe, a Santa Monica College (SMC) student, who moved from Orange County to attend the school. “It beats having to walk seven blocks to Trader Joe’s.”

This is Rowe’s second year at SMC and his second year living in a kitchen. He lives with three other SMC students in an apartment that should, according to their lease, only house two. The location is close enough that he can ride his bicycle to campus in less than 10 minutes. But for the majority of SMC students to afford to live in Santa Monica, they have to find ways to make it work.

“The rents are so expensive here, there is no way a SMC student can go to school, work a minimum wage job, and make enough money to afford an apartment of their own,” Rowe said. “There just isn’t enough time in the day. The only students who can afford an apartment are the ones who have mommy and daddy paying their rent.”

He sleeps on a futon next to a refrigerator in what the apartment’s layout calls the dining room, which is a 10 by 10 space across from the sink. He’s able to squeeze a small outside closet on wheels next to the futon. A Cajon, which is a percussion instrument shaped like a box with a hole in the back of it, is used as a nightstand.

This costs him $200 a month to live, something that he can manage and actually have some money left over to spend and have fun.

“I get a little financial aid, but not much,” he said as he picked up one his four guitars spread out over his room and begins to lightly strum a couple chords. “I definitely have to have a job though because the financial aid never ends up getting to me until about mid-way through the semester.”

On SMC’s website they offer a seven-step guide to finding a place to stay near campus. Although SMC does not offer students lodging, most students find accommodations within five to seven days of arrival, according to their website.

The first admonition on the website: “Before your arrival, make a reservation!” which one may think goes without saying.

The list goes on to suggest areas to live and advises students and soon-to-be renters on what to look for when renting.

What the website, however, fails to bring to students’ attention is just how expensive it is to live in Santa Monica or any of the other Westside areas near SMC.

The school offers something called “The International Education Center,” which is made up of staff and “peer mentors,” who act more like surrogate parents or summer camp counselors – offering helpful advice, but ceasing to do really much else.

This leaves a lot of students to fend for themselves, usually forced to juggle a day job and then take night classes.

Rowe and his roommates cram four people into a small, two bedroom apartment, just enabling them to barley pay the nearly $2,500 a month rent.

“SMC is one of the best community colleges in the nation and, I’m pretty sure, the number one transfer school too,” said Rowe, maneuvering around two guitars on his way to the sink to wash out his bowl. “My brother transferred to UCLA from here, so thatthe goal. That’s what makes all of this worth it.”

Before he leaves for work, Rowe adjusts the futon so that it just looks like a couch facing the refrigerator, just in the case a plumber or someone comes to the apartment.

It must look like only two people live there, so when he knows someone is coming over to work on the house, Rowe will clean up a little, placing some of the guitars on the newly transformed couch and others on their stands.

He will hide the closet on wheels in the half bathroom just down the hall from where he sleeps. It becomes his storage area when need be.

“Gotta get to work now and hopefully get some time in after to study if I’m not too tired,” Rowe said while leaving the apartment.

When asked why he still lives in Santa Monica when he’s forced to live in a kitchen, Rowe responded, smiling, “because it’s nice to live here.”

“A lot of other students commute here from much further away so that they can afford to live in a studio or have a place to themselves, but it’s just too nice here and it’s so close to campus,” he said.