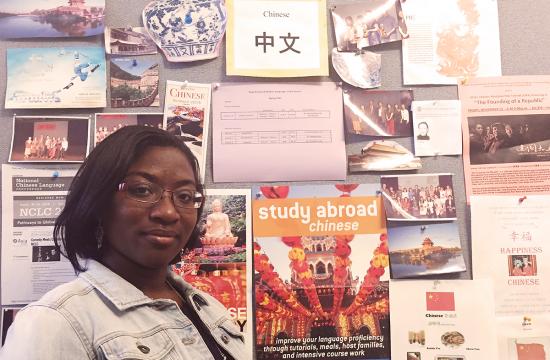 Santa Monica College student Courtney Kelley has been awarded a U.S. Department of State Critical Language (CLS) Scholarship to study abroad this summer in Suzhou, China. She is one of only 550 students selected from 200 colleges and universities across the nation for the CLS program – a U.S. government effort to expand dramatically the number of Americans mastering critical foreign languages.

Kelley, a political science major at SMC, plans on becoming a diplomat specializing in China. She speaks Mandarin at an intermediate level after studying it for three years, and she says that her time in China will deepen her linguistic abilities as well as expand her knowledge of Chinese culture, history, politics and business practices. In addition to studying at Soochow University, she plans to learn a lot from the Chinese family with whom she will live.

“The State Department’s idea is to find languages that Americans do not usually speak, languages that are away from American comfort zones and our sphere of influence,” Kelley explains. These include languages like Arabic, Azerbaijani, Hindi, Indonesian, Japanese, Persian, Russian and Turkish. CLS participants will spend up to ten weeks in 13 different countries.

Both Kelley’s interest in China and her career goals were inspired at an early age by the Disney film Mulan.

“Everyone who hears that giggles, but it’s true,” she says. “Watching that movie, I wanted to be her. I loved the culture and the artwork, I wanted to wear comfortable clothes and save the country.” Diplomacy seemed a real-world way to work toward that goal, she says.

This fall, Kelley will transfer from SMC to the American University of Paris in France to major in international comparative politics and build her knowledge of yet another nation’s culture.

“I’ll be examining the French language, culture, history, how they see the world, as well as the American-French relationship,” she says. SMC students like Kelley get guaranteed transfer admission into a number of UC, CSU and private institutions – including the American University of Paris – by meeting certain requirements.

“Most of my friends at SMC are French, Russian and Chinese,” says Kelley. “They were really the ones who urged me to go to school in France and to go to China.” She credits SMC expanding her worldview and enabling her to meet people from a range of nations and cultures.