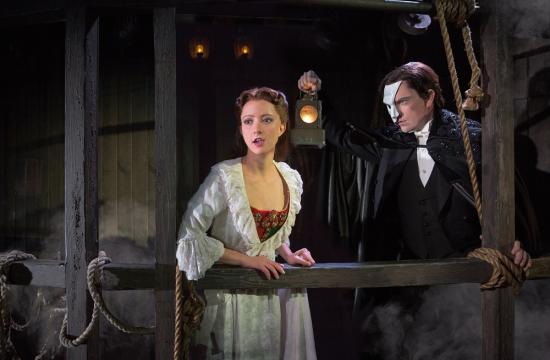 Based on the classic novel Le Fantôme de L’Opéra by Gaston Leroux, “The Phantom of the Opera” opened last week at the Pantages Theatre in Hollywood for an eight-week run.

The show tells the story of a masked figure who lurks beneath the catacombs of the Paris Opera House, exercising a reign of terror over all who inhabit it.

He falls madly in love with an innocent young soprano, Christine, and devotes himself to creating a new star by nurturing her extraordinary talents and by employing all of the devious methods at his command.

The production boasts many exciting special effects including the show’s legendary chandelier.

The beloved story and thrilling score – with songs like “Music of the Night,” “All I Ask Of You,” and “Masquerade” – are performed by a cast and orchestra of 52, making this show one of the largest productions now on tour.

British theatrical producer Cameron Mackintosh is behind the touring production, revamping the Andrew Lloyd Webber’s original production of “The Phantom of the Opera.”

Recording artist Chris Mann had his breakout turn on NBC’s “The Voice.” In 2012, he released his debut solo album “Roads” and followed with his PBS Concert “Chris Mann In Concert: A Mann For All Seasons.” Meanwhile, Katie Travis has performed principal roles at The Fireside Theater, Liederkranz Opera Theater, The MUNY (Les Misérables, Cosette) and won the Lys Symonette Award (Lotte Lenya Competition).

With “Phantom of the Opera” still the reigning champion as the longest-running production on Broadway after 27 years, with no end in sight, Mackintosh said he was delighted that this spectacular new production has been as well-received in the U.S. as the brilliant original.

“With an exciting new design and staging, retaining Maria Björnson’s amazing costumes, the new Phantom is thrilling audiences and critics alike all over again – the music of the night is soaring to dazzling new heights,” Mackintosh said.

Individual tickets start at $29. For

tickets or more information about the Los Angeles engagement of show, visit www.HollywoodPantages.com/thephantomoftheopera.