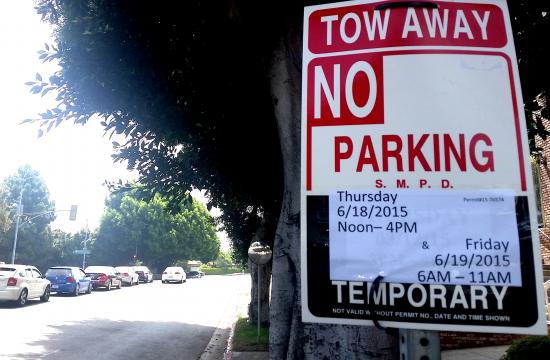 Motorists should begin preparing for some late-week traffic headaches, with President Barack Obama scheduled to visit L.A. for a pair of Thursday fundraisers.

Obama is scheduled to arrive at Los Angeles International Airport at 2:20 pm Thursday, just in time for the evening rush hour. Obama is expected to attend a pair of Democratic National Committee fundraisers — a roundtable discussion hosted by producer/director Chuck Lorre in Pacific Palisades and a reception/dinner at the Beverly Hills home of filmmaker Tyler Perry.

Although specific details about the president’s travel plans are never released, motorists in the West Los Angeles, Pacific Palisades and Beverly Hills areas can likely expect sporadic road closures as the president’s motorcade moves through the area. Obama typically gets to and from the airport via helicopter, but is still driven on city streets to reach his ultimate destination.

Tow away zones were posted Wednesday morning along Centinella Avenue between Ocean Park and Pico boulevards. In the past Obama has flown from LAX to Santa Monica by helicopter before entering his motorcade. The tow zone times are Thursday from noon to 4 pm and Friday from 6 am and 11 am.

Obama is scheduled to spend Thursday night in the Southland, then return to LAX for an 11:40 am Friday departure to San Francisco, where he will attend more fundraisers and speak at the annual meeting of the U.S. Conference of Mayors.

The president’s departure on Friday won’t end the traffic issues. Some additional disruptions will likely be caused that day thanks to presidential hopeful and former Secretary of State Hillary Rodham Clinton, who will also be in town for a series of fundraisers.