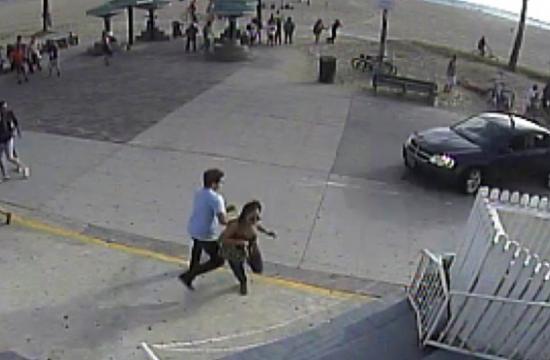 A Colorado man who drove his car on the crowded Venice boardwalk, striking several pedestrians and killing an Italian woman on her honeymoon, was convicted today of second-degree murder and other charges.

Nathan Louis Campbell’s attorney conceded during the trial that his 39-year-old client was driving the 2008 blue Dodge Avenger that barreled down the boardwalk on Aug. 3, 2013, but said Campbell was actually doing everything he replica watches could to avoid striking pedestrians.

In addition to the murder count, Campbell was also convicted of 17 counts of assault with a deadly weapon and 10 counts of leaving the scene of an accident.

Jurors deliberated about three days before reaching their verdict.

The verdict came shortly after the prosecution decided to try to “assist the jury to render a decision on second-degree murder” by removing an allegation of premeditation and deliberation, according to Deputy District Attorney Victor Avila.

Campbell is due back before Los Angeles Superior Court Judge Kathryn Solorzano for sentencing Aug. 5. He is facing a potential life prison term.

In re-arguments before the jury this morning, Avila told the seven- woman, five-man jury, “He (Campbell) could have stopped this whole thing at the very beginning … He hits 12 people before he even hits Alice.”

Defense attorney James P. Cooper III countered that there was not sufficient evidence of an intent to kill, calling it a “tragic unfolding of events.”

In opening statements, Avila told the jury that Campbell was angry because he believed a drug dealer had cheated his friend and threatened to run the dealer over.

Instead, Campbell struck 32-year-old Alice Gruppioni and 17 other people with his car, with the Italian woman “on the hood of his car for over 300 feet” before her body slid off, the prosecutor said.

Campbell had “full knowledge” of how crowded Venice’s Ocean Front Walk was because surveillance footage showed him walking on the popular tourist destination earlier that day, the deputy district attorney said.

Campbell walked into the Santa Monica Police Department a few hours after the driving on the boardwalk and said, “I’m the one you’re looking for. I’m the one who hit all those people,” the prosecutor said.

Campbell’s attorney countered that his client was not a party to the drug transaction. He acknowledged that Campbell drove onto the boardwalk — although he did not explain why — but said the car struck several objects before hitting any people.

“He did avoid hitting many more people by taking that S-like route down the boardwalk,” the defense attorney said.

In emotional testimony last month, Christian Casadei told jurors through an Italian interpreter that he was holding his new wife’s hand when he spotted the car careening through the crowd.

Casadei said he tried to pull Gruppioni into a doorway to avoid being struck.

“After that, I felt, like, a hit. I closed my eyes and when I opened them back up, I was on the ground,” the newlywed said.

“I was screaming her name … I thought she had fled, but I wasn’t able to find her,” he told jurors.

Casadei said he finally found her “lying on the ground, face-down on the asphalt with blood next to her head and that’s it … she was not moving.”

Casadei said he took her by the hand as she struggled to breathe, but she was unable to say anything to him.