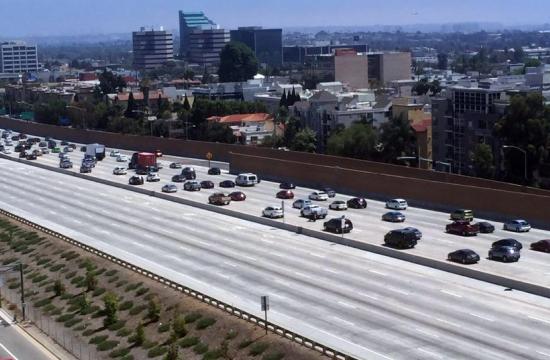 Traffic turned into a nightmare today in West Los Angeles as President Barack Obama was driven through town en route to the first of two Democratic National Committee fundraisers.

Obama arrived at Los Angeles International Airport around 2:20 p.m., then was flown by helicopter to Santa Monica Airport. A presidential motorcade then moved east on the Santa Monica (10) Freeway and north on the San Diego (405) Freeway.

Both freeways were completely closed to traffic, as were the freeway onramps — leaving some streets in gridlock. Some motorists took to Twitter to complain about the congestion, using the hashtag #ObamaJam.

The traffic disruptions are expected to continue into tomorrow. Obama will attend two fundraisers today, then travel to Highland Park on Friday to record an appearance on a podcast.

The Los Angeles Police Department issued a list of areas motorists should try to avoid today and Friday because of Obama’s visit.

The following areas should be avoided until 6 p.m.:

The following areas should be avoided until 4 p.m.:

— Bundy Avenue and the Santa Monica (10) Freeway; and

The following areas should be avoided until 8:30 p.m.:

— Beverly Drive and Sunset Boulevard; and

The following areas should be avoided between 8 a.m.-noon Friday:

— Mountain Street and the Foothill (210) Freeway;

— Ventura (134) Freeway and Colorado Boulevard; and

The following areas should be avoided between 9 a.m.-noon Friday:

— York Boulevard and Avenue 51; and

The following streets in Pasadena will be closed from 7 a.m. to 2 p.m. Friday:

Merv Griffin Way between Wilshire Boulevard and Santa Monica Boulevard in Beverly Hills will be closed until noon Friday.