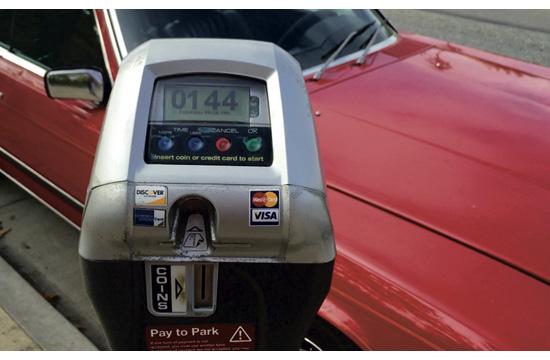 Cars bob-and-weave, most jockeying for the next open parking meter. A bike rider makes his way along the green bikeway that hugs the left side of parked cars. A woman exits Starbucks, coffee in hand, and gets in her car. She barely pulls away before another car takes her place at the meter.

From Colorado Boulevard, Main Street winds between City Hall on one side and Rand and a Starbucks on the other before it meets with Pico.

This strip, lined with 43 parking meters, is where the City is currently testing its “customer-focused” pilot meter program.

The pilot program began on April 30 of this year, trialing out a new, smarter kind of parking meter, one that actually seems to be more on the user’s side than against them.

Some of the features being tested include disallowing meters from accepting credit-card payments when parking fees were not required and improving display messages so it tells the customer “No Payment Required,” and displaying how much time is left before there is no longer enforcement.

Another feature that the City is trying is a pre-pay option, where the machine wouldn’t just mindlessly eat one’s money when paid before the enforced hours begin.

Under the pilot, for example, one could arrive at the parking meter 30 minutes before enforcement hours (eg. at 7:30 am), punch in that they want to park for an hour and a half (until 9 am), and the meter would charge them only for the enforced hours (60 minutes, not 90 minutes). Three-hour paid parking enforcement begins at 8 am on Main Street.

While the program is considered “customer-focused,” most “customers” parking along this strip on Main Street remain unaware.

“I think this new policy with the new meters is really helpful,” said Jake Andrea, a young Santa Monica resident who frequents Tongva Park. “I think it could save a lot of people, including myself, money. I just wish Santa Monica would inform us about the policy, so I’d know about it. I think it would be beneficial to everyone.”

Another Santa Monica resident and Tongva Park frequenter said that she had heard of the program from a friend, but didn’t know where it was happening.

The City said that there was no promotion of the pilot and that they will only modify signage, most likely on the display screen of the meters, once the program is rolled out.

The City is still determining when and how to rollout the successes from the pilot to other parts of the City.

“We want to make sure that when we roll it out, it works as promised,” said Debbie Lee, Santa Monica’s Communications and Public Affairs Officer.

Earlier this week on Main Street, a Rand security guard walked his post along the Rand pathways, which all lead out to the sidewalk with the meters. He glanced at a couple pushing a stroller and smiled and then continued on his patrol.

He said he wasn’t aware of the policy either, when asked, gesturing towards the few signs that line the street. One sign listed enforcement hours and another read “Do Not Drink” with the words “Recycled Water” right above it.

He smiled. At least we know not to drink the water.