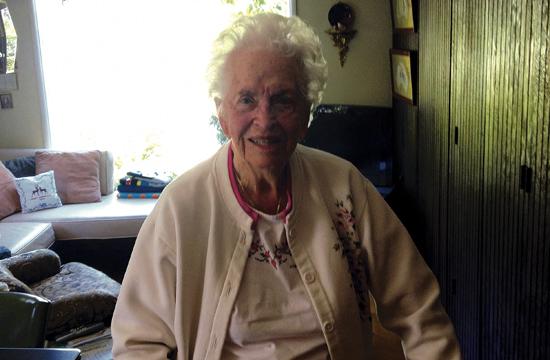 Century. That word is more than just an insurance company; It’s 100 years. In the U.S. alone from 1915-2015, four generations passed, there were two world wars and the cold war, as well as Vietnam and Korea, among others. The country went from the roaring ‘20s to the Great Depression to McCarthyism to Civil Rights, and everywhere in between. Now imagine living through all of it.

Well, that is exactly the case for West Los Angeles resident Pauline Alchian, who, like the Oliver Stone movie, was born on the 4th of July.

Alchian has managed to live a century, being born in 1915, and going to interview her, it was quite an experience. Her single story house almost seemed like it was lost in time, with shag carpeting and architecture that was decidedly 1960’s, almost looking like the house from The Brady Bunch.

Upon being let into her home by her nurse, it was shocking how spry this woman was. She had bright blue eyes that seemed to pierce into whatever she was looking at. Despite using a walker, she was able to keep a decent pace, leading me to a couch across from the kitchen to sit down for the interview. Ultimately, it went well, except for her tendency to stare off into space, which was frightening, but she ultimately made it through the interview.

Pauline Alchian was married to a man (who shall remain unnamed), who was a statistical officer for the Air Force during World War II, and was a statistics professor at UCLA after that for 50 years. She had her first child in 1943, and the second in 1946. When asked about her children, Alchian leaned in, as if she didn’t want her children to hear, and said, “I had my first child because I wanted to make sure we had a child in the event that (he) didn’t return. Our second came when he returned.” Apparently a boy and a girl were ideal for them.

When asked what her favorite decade was in the 20th century, Alchian replied, “Anything that includes 1939.” This was the year she married her husband.

“The month Germany invaded Poland was the month we got married, which meant he was going to spend quite a bit of time in the Air Force,” she said.

When asked about her secret to her longevity, Alchian replied, “It happened faster than I thought it would” and, “I have no answer for that.” Which, while unsatisfying, is more or less accurate. People don’t seem to will themselves to keep alive as they near their centennial, but it happens anyway. All that society can do is look at the common denominators of people who have happened to make it to a century.

According to US News, common threads of centenarians include being female, (82.8 percent of them being female as of 2010), less diversity (82.5 percent of them being white), and living with others, among other factors. Another theory is a lack of stress. After speaking with Alchian, it seemed that her life was a pleasant one with a happy marriage and healthy kids, and she seemed like a happy woman.

All in all, this woman has managed to live for an entire century, and she seemed to have a grand old time. Witnessing that much history is truly a feat.