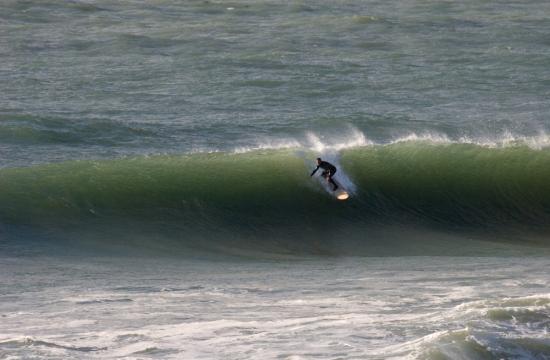 It was high tide on Wednesday and Santa Monica Beach was crowded for a weekday, the large waves making there way to the feet of onlookers as they cautiously took a few steps back. People watched as surfers and body boarders would ride the four-foot sets

Out in the lineup, 14-year-old Chad Bangs was surfing in one of the first large swells to hit Southern California this summer. He wore his favorite black wetsuit with red sleeves and rode a board no larger than his five-foot frame.

“I saw a bunch of rescues today. It was crazy,” Bangs said. “Santa Monica doesn’t really get that big. My brothers surf at Malibu, but it’s close to home so I surf here sometimes. It was big,” referring to where he was surfing in Santa Monica, yards away from the pier, near Muscle Beach.

Lifeguards up and down the cost of Los Angeles County could be seem this past week running into the water and, sometimes, rescuing three people at a time. On Tuesday alone, it was reported that more than 400 rescues occurred within L.A. County beaches, 87 of which occurred in Manhattan Beach, lifeguards said, and more than a dozen in Venice.

The reason for all the rescues: a perfect storm of swell and a nasty rip current that would take swimmers out to sea.

A long-period southwest swell hit Southern California beaches along with a minor northwest wind swell. The swell has seen waves as large as five feet at some exposed breaks like Malibu and about three to four feet at select Santa Monica breaks.

This has meant a great week for surfers but a tough one for lifeguards, where a combination of summer beach goers and dangerous conditions has them in the water more than they’ve been on the beach.

Lifeguards warned the public on Wednesday of the dangerous rip currents that have formed along the coast of Los Angeles County beaches and believe more people will head to the beaches in the coming days to escape the predicted high temperatures and humid conditions that are to hit Southern California.

“My dad told me to be careful even though I’ll be on my [surf] board,” Bangs said. “My older brothers have been surfing all day at Malibu, but I don’t go there because it gets too crowded. There’s mostly swimmers here”, referring to Santa Monica, “so I’ve probably seen more lifeguards than them,” he jokes.

On Tuesday, the Los Angeles county lifeguards Twitter account said that strong rip currents were expected to continue through Friday, prompting officials to warn swimmers to stay near an open lifeguard tower.

Lifeguards suggest that swimmers swim in front of lifeguard towers and to ask lifeguards where it’s safe to swim.

If you find yourself trapped in a rip current, do not swim against it.

Instead, try to stay parallel to the shoreline until the current stops. Then, swim at an angle away from the current towards the shore, lifeguards advise.