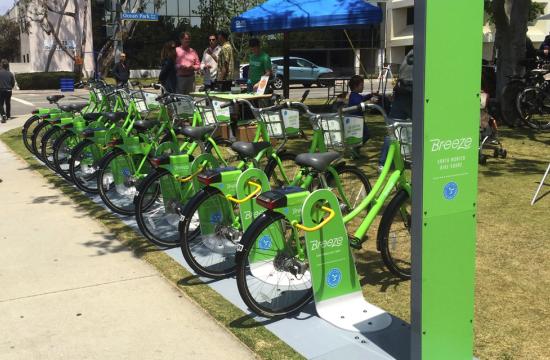 On Tuesday night, City Council unanimously approved (in a 6 to 0 vote with only Councilmember Terry O’Day absent) a first reading of an ordinance to implement a bike-share system in the city. The proposed ordinance would see 65-75 hub stations throughout Santa Monica, including up to five in Venice.

The Breeze system’s “smart bike” technology provides the registration, checkout, and locking mechanism on each individual bike, eliminating the need for kiosks at every hub and replacing complex docking technology with simple braded racks. The rack design makes it easy for the bikes to park and lock.

Each bike features eight speeds, GPS, and onboard technology to let riders unlock and ride. There will also be an app that will allow riders to see their rides and choose to share their experiences.

An issue, however, raised by Councilmember Sue Himmelrich, was how the city would enforce non-bike-share bikes using the bright green bike-share racks, something the ordinance prohibits.

“I understand that when a car is parked where it shouldn’t be,” Himmelrich said, “you can give it a ticket because it has a license and you know whose it is, but how do you do that with a bike?”

To help clarify this problem, City staff said that there would be “friendly notices” on bike racks, warning bikers of the penalties for locking their personal bikes on the racks. Staff proposed a three-month period where the city would work on “extensive public outreach” to educate the public on the new policy.

After that period, City staff said, bikes improperly parked would be removed and impounded by the Santa Monica Police Department with a $50 penalty.

Staff made it clear that police officers would not be actively patrolling ride-share racks, but that city workers would be in charge of monitoring them, reporting problems only after a bike has been at a rack for some time, a time frame that is vague and still to be determined.

“My hypothetical is that you move to the city, there is one of these racks…you haven’t been here for the three months when the friendly notices have been coming out, and you go out the next day and your bike is gone,” said Himmelrich, raising another one of her concerns about the bike policing policy.

In response, City staff said that they would make it “very clear that these are bike-share stations. There will be signs on every rack that will say it is prohibited…if we don’t have this ordinance in place than our police don’t have the mechanism to enforce it.”

Council is trying to strike a balance in its enforcement between fair penalties while trying to deter prohibited bikes from using the racks.

Councilmember Ted Winterer raised the idea of having a penalty gradation, which would increase the penalties for repeat offenders while keeping first time offenses low. To enforce this, he suggested having riders produce their driver’s license upon retrieval of their bikes that the police would then keep track of, noting how many offences an individual has.

The $50 penalty is for the work and time it takes for police to remove a bike from a bike-share rack, a fee that the City Attorney said could be legally reduced if the council wished.

Council was insistent upon making sure that the public was not punished for riding bikes, which would reduce traffic throughout the city.

“If we want to be a bike friendly city, probably towing them away and charging them $50 to get them back is not the friendliest thing we can do,” said Councilmember Gleam Davis. “We should give people notice that they shouldn’t be parking their bikes there…we should be as friendly as possible to those who are using their bikes.”