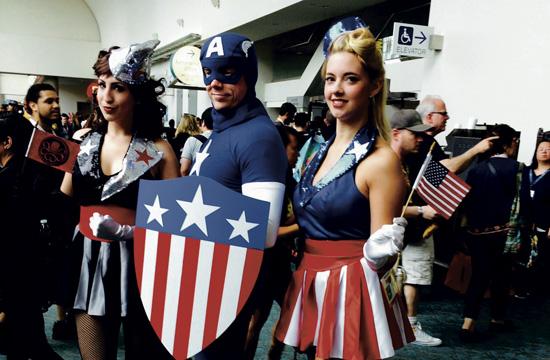 The San Diego Comic-Con is four-and-a-half straight days of total madness and pushing through enormous crowds of more than 130,000 people and ending up almost completely exhausted. But it’s also an incredible amount of fun, a sensory overload of the best kind, and a truly treasured experience for comic book fanatics and those who love science fiction, fantasy, horror, video gaming, cosplay, etc.

So here’s my story:

After eight years away from the San Diego Comic-Con, I was given the opportunity to attend the biggest pop culture event on the planet as I was covering the show for a comic book website. How could I pass it up? Getting a Golden Ticket to Comic-Con these days is almost like winning the lottery. Tickets sell out within hours of going on sale and you have to be really, really lucky to be chosen.

As I mentioned, I was lucky enough to get in thanks to my four-day media pass. Although I’ve been to several of the bigger shows in the past two years – including WonderCon in Anaheim and Stan Lee’s Comikaze in Los Angeles – there is nothing that compares to San Diego. It’s absolutely incredible in its enormity, and the number of fans is staggering.

Yes, things sure have changed since the last time I was at the San Diego Comic-Con in 2007. Back then it was mostly a convention for true-blue comic book fans, but now it’s become popular and cool to say you went to Comic-Con. Everyone wants to attend this pop culture spectacle. It’s not just the fanboys and fangirls anymore.

Actually, one of the big lures of Comic-Con is the presence of famous movie and television celebrities. Ben Affleck, Henry Cavill, and Amy Adams showed up to talk about their upcoming film “Batman v Superman: Dawn of Justice.” And there was huge buzz created by the appearances of Harrison Ford, Mark Hamill, and Carrie Fischer – who will all appear in the highly-anticipated “Star Wars: The Force Awakens.”

Many, many other celebrities were in San Diego as well to take part in the phenomenon that is the San Diego Comic-Con.

It’s hard to believe just how gigantic and outrageous this event has become. This year Comic-Con celebrated its 45th anniversary. Back in the early days the show only attracted small local crowds, but the event has grown each year by leaps and bounds. When I first attended Comic-Con in 1998 there were about 60,000 fans in attendance. Now that number has doubled and many people feel the San Diego Convention Center needs even more expansion to help deal with overcrowding.

Trying to get through the colossal showroom floor can at times be treacherous and walking from one end of the exhibit hall to the other is sure to wear a person down. It’s incredible to see all the amazing superhero displays and fun to chat with fellow comic book lovers at the booths. There are literally hundreds of exhibitors on the showroom floor and despite having four days to look around you never feel like you’ve seen it all.

When fans feel worn down by the showroom floor, it’s nice to be able to take breaks and check out the panels in the upper levels. There are so many fascinating panels going on throughout the weekend featuring leaders from the comic book, TV, and film industry.

So much to do, so little time.