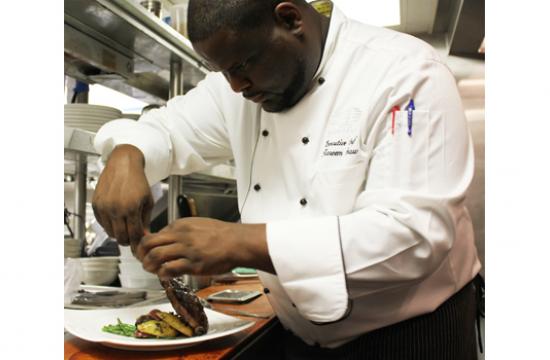 Executive Chef Kareem Shaw’s menu at Hotel Shangri-La in Santa Monica is filled with the very best of local California cuisine with an international flavor catering to match the diverse range of global guests that visit the Ocean Ave. property.

He said he needs at least one thing on the menu to match his customers’ diverse taste buds.

“I try to be well rounded and have a menu that has a lot of different options and flavors for different people, especially at a hotel,” Shaw said. “You have to be extremely flexible because you have so many guests. You have to make sure that when someone looks at your menu, no matter what culture they’re from, that they can find something and eat it and actually enjoy it.”

Shaw’s large and diverse menu did not just happen overnight, but over years of working as a chef at various restaurants.

Shaw started his career in Michigan under Don Curto at the “New York Deli” restaurant and was influenced by Curto’s traditional Italian cuisine featuring a selection of soups, fresh pasta, and sauces. Shaw began as a dishwasher and in just six years took over the restaurant, which won an award for the best soup in Northern Michigan three years in a row.

As Executive Chef at the Wild Rover restaurant, Chef Shaw cooked for President Barack Obama. During that time, he was also filming TV segments for “Good Day Wisconsin,” where he demonstrated how to cook different types of cuisine.

Shaw then took over his own restaurant, which, he said, gave him a lot of freedom to experiment.

“[Owning my own restaurant] was an amazing experience, and I was able to do whatever I wanted and develop my own style,” which has translated into the unique combination of dishes offered at Shangri-La.

“When people always ask me what type of cuisine I do, I say ‘I do everything.’ I am all across the board,” he continued, “I can do an Asian inspired dish and then do something traditional French and then turn around and do something Southern or Korean. And that’s the beauty of growing up in California. We have access to every type of cuisine.”

One of Shaw’s unique creations is a Rib Eye paired with a cauliflower garlic puree, chimichurri, fingerling potatoes, and grilled asparagus that Shaw calls one of the staples of his menu and by far the most popular dish.

“I had a bunch of cauliflower and I am not really a huge cauliflower fan, but I know a lot of people like it so I was trying to find a way to make it good for people who may not take a chance on cauliflower or may not like it,” he said. “So I thought about making a cauliflower-garlic puree…so then with every bite you get the flavor of this rib eye, creaminess of the cauliflower puree, and then a snap of a potato, and that citrusy taste…there’s like five or six different layers of flavors in one dish and it absolutely works.”

“The cauliflower puree is so intense when it’s cold, but not too intense to be overwhelming. It is the binder of the dish that brings it all together…it’s almost like you get a bonus salad. And with salads you don’t see people putting a dressing and a puree on a salad so it’s kinda extremely edgy and different because you don’t see purees on salads. How many chefs out there are doing purees on a salad? I don’t know any.”

These are just a couple of the many unique dishes that chef Kareem cooks up at the Shangri-La Hotel in Santa Monica.

His eclectic style gives customers and their palates an infinite amount of tantalizing tastes and options—everyone will find something to suite their gustatory desire, no matter how exotic that desire may be. Kareem will have something for you.

For reservations, call 310.451.0717 or visit www.shangrila-hotel.com/Dining-Nightlife.