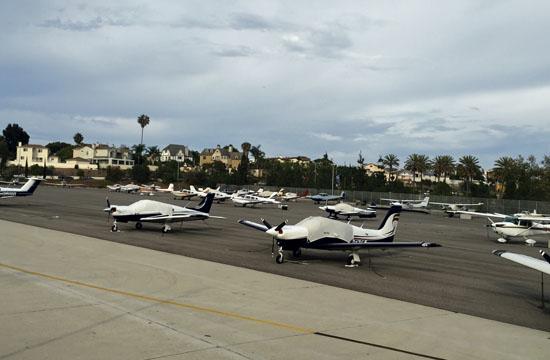 A 31-year-old agreement between the Federal Aviation Association (FAA) and the City of Santa Monica concerning Santa Monica Airport ended Wednesday, allowing for the city to begin reclaiming its control of SMO, a little at a time.

In thinking about the future of the airport land, the City took a look at the expiring agreement to find out what options it would have going forward.

What City staff uncovered was that once the agreement with the FAA expired the City would no longer be required to provide the 12 acres of tie-downs for the airport.

“One of the requirements in the ’84 agreement that expires as of July 1…was that there was a specific amount of tie-down spaces that was required to be at the airport,” said Martin Pastucha, Director of Public Works and Airport Director. “When the agreement expires, we are no longer required to have those tie-down spaces.”

The agreement made between the City and the FAA came as a result of lawsuits that were filed back in the 1980s that, rather than going to court, ended with the settlement agreement.

Now that the agreement has expired, the land will become a part of Airport Park, at least at some point. The time frame for clearing out the tie-downs and transforming that cement parking area into a park is still uncertain.

“On March 24 the City Council voted unanimously to develop recreational uses on the existing non-aviation parcel,” Mayor Kevin McKeown said. “As for the airport as a whole, the City Council continues to move toward gaining increased control of our land, with the goal of reducing or eliminating the negative impacts of aircraft operations on air quality, health, and safety.”

Taking things a step further in the quest to regain the airport land, Mayor McKeown, along with Pro Tempore Tony Vazquez, Councilmember Sue Himmelrich, and the City Attorney will visit Washington, D.C. to talk with the FAA about the future of the Santa Monica airport, something that the overwhelming majority of community members want eliminated.

Even though the tie-down land is now the City’s, the park incorporation process will most likely take longer than people are hoping for.

The City will have to inspect the tie-down land as part of a park feasibility plan and the results from the inspection will then be brought to the Council for further discussion. The inspection will also look at the ability of the airport, with its existing land, to tie-down the planes, amongst other things, according to Pastucha.

After this has taken place, the City, guided by public input, will then decide what to do with the new land, something the City began preparing for when it put money aside during budget sessions for the new park.

Also there is still the fact that there are planes tied down on that cement parking strip on either side of the airport terminal that will have to be taken care of.

But the wait is well worth it for some community members.

“The park will improve quality of life within the entire city,” said a spokesperson for Santa Monica Airport2Park Foundation, who held a BBQ on July 1 in Airport Park to celebrate the expiration of the agreement. “It will eliminate the negative pollution, noise, and safety impacts of the airport; it will provide desperately needed sports fields taking the pressure of fields all over the City; and it will yield countless other benefits both measurable and intangible,”

The celebration had a five-piece bluegrass band, food, displays of the possible future of Airport Park, and a chart where attendees could vote on what they most wanted to see on the newly acquired land.