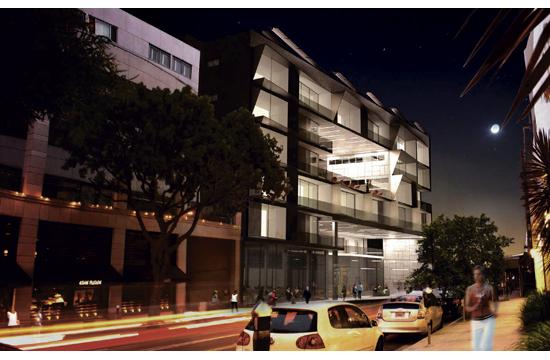 The somewhat-futuristic looking building, which is as slick as a building could be and looks like what Apple would design if they designed buildings, really is something new and innovative and reflects that in their “community benefits.”

“The package of benefits that is being offered as part of this project are meaningfully better and… more significant of a benefit [than previous projects],” said Planning Commissioner Nina Fresco at Wednesday night’s Planning Commission meeting.

The project, to much praise from the community, has a list of “community benefits.” NMS will have a total of 13 units (20.32 percent of the total of 64 units) allocated to on-site affordable housing. Within the existing preferences adopted by the City Council in the Administrative Guidelines for the Affordable Housing Production Program, households having at least one member of the household with a physical disability shall have a preference for one-half of the affordable units in the project, according to staff.

“I’ve been to all the meetings over the last couple of years and it seems like it has been received very well, from the community and the various boards. Look, I am not an architect, but just as a person and my aesthetics say this is an amazingly unique design…the housing sounds good,” said Jerry Rubin, Santa Monica resident and activist at the meeting.

“We need housing,” he continued. “This is balanced…and it will help people who need low-income housing too. I think this project is going to serve the community well, it has been a good process. They have listened to you and it has been received well and I hop it is supported.”

The building will also have sustainability elements that will require Leed Platinum certification, photovoltaic panels on the roof deck, a building design that will use 15 percent less energy than required by California Energy Code, and water conservation. They will also pay $300,000 to be used for water conservation programs.

“This building as designed…will make one of, if not the most, greenest buildings in Santa Monica,” said a city attorney. “This is a very high standard of sustainability for a building.”

There was a motion to decrease the height, make sure irrigation system be as efficient as a drip system, explore storage of reusable energy, add one more 80 percent income studio, and add more housing, but aside from that, everyone was in agreement and excited about what has been accomplished.

The discussion of the first building took a little over three hours.

“We have formulated a recommendation to City Council and it will be in City Council’s hands to take action on this development agreement,” said Planning Commission Chair Jason Parry.

The project is located at 1560 Lincoln Blvd. (the current site of a Denny’s) and will require a development agreement because it qualifies as a Tier 3 project under the Land Use and Circulation Element.

The building also has an affordable housing plan. It will increase the percentage above 20 percent since the project is a Tier 3 project and the 10 percent very-low affordable units shall be at least 2 bedroom units, compliant with AHPP requirements.

The second building will also be sent to City Council for further discussion.