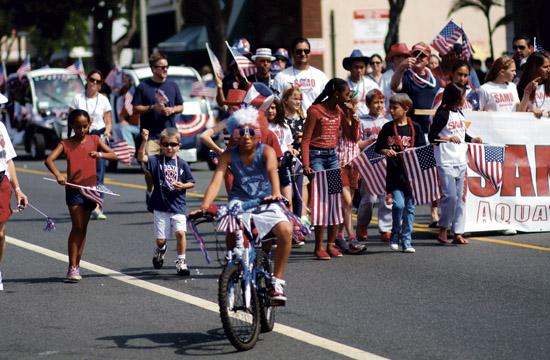 More than 8,000 spectators are expected along the sidewalks of Main Street this Saturday for the 9th Annual Fourth of July Parade in Santa Monica.

This year the parade will feature about 90 entries with more than 1,000 parade participants.

The parade will begin at 9:30 a.m. at Pico and Main featuring floats, music, vintage trucks and automobiles, horses, cyclists, walkers and more along the 1.4 mile route down Main Street from Pico to Marine and west onto Barnard Way, concluding at the beach parking lot.

Produced by the Ocean Park Association (OPA), this is a community event with participants and spectators comprised of residents, businesses, nonprofit organizations, families and children of all ages.

Celebrating our nation’s independence, red, white and blue will be the colors of the day and the theme of “Inspirational Heroes” will be represented by our Grand Marshal, Will Montgomery, a local resident who is a Global Messenger for Special Olympics which will present World Games 2015 in Los Angeles later this month. Additional heroes, including U.S. veterans will be taking part in the parade.

Streets and intersections on and around Main Street south of Olympic will be blocked and spectators are encouraged to walk, cycle, or park early in the Civic Center parking lot or structure, accessible by Fourth Street only, across from the Doubletree Hotel. Parking in these lots costs $5 maximum.