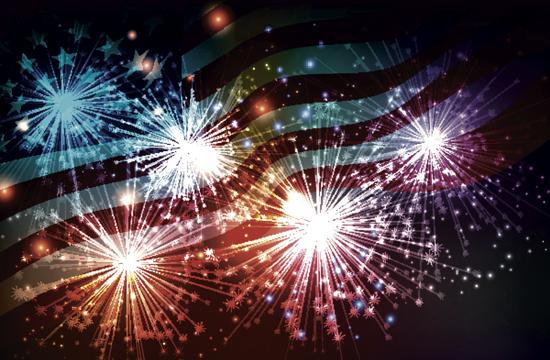 Fireworks shows to mark the 239th anniversary of the nation’s independence will be held tonight at several of Los Angeles County’s iconic venues along with parks and high schools.

What is annually billed as both Southern California’s largest and longest-running Independence Day fireworks show will be held at the Rose Bowl.

Americafest, the 89th annual Fourth of July celebration at the Rose Bowl, will also include a motorcycle stunt show and musical performances by Brandon Bennett, who portrays Elvis Presley in the Chicago production of “Million Dollar Quartet,” and the Beatles tribute band Liverpool Legends to mark next month’s 50th anniversary of when Presley first met the Beatles.

The band members were selected by Louise Harrison, the sister of the late Beatle George Harrison. Louise Harrison will attend the fireworks show, according to stadium officials.

The fireworks show will begin at 9 p.m. and be followed at 9:30 p.m. by the showing of the 2013 animated comedy “Despicable Me 2” on the stadium’s video board.

The Rose Bowl parking lots will open at 9 a.m. A festival with food vendors, entertainment, craft-making, exhibits and inflatable rides for children will begin at 2 p.m. in Area H outside the stadium.

The stadium gates will open at 6 p.m., with the motorcycle stunts preshow set for 6:45 p.m. and the opening ceremonies at 7 p.m.

General admission tickets are $13, while reserved seating is $25.

The third annual Fourth of July Block Party at Grand Park will include the first rooftop fireworks display set to iconic American music.

The party will run from 3-9:30 p.m. and be spread over eight blocks, from Temple to Second streets between Grand Avenue and Main Street. It will feature music, mural-painting, dancing and food from 30 vendors.

Marina del Rey’s 20-minute fireworks show will begin at 9 p.m., synchronized to music played over loudspeakers throughout Burton Chace Park. Burton Chace Park and Fisherman’s Village are considered the best spots to view the fireworks, which are shot from a barge across the marina’s main channel.

The 17th annual Fourth of July Fireworks Festival at CBS Studio Center in Studio City will include musical performances by Deana Carter and Cody Bryant, magic shows and a display of famous cars from movies and television series. Gates will open at 4:30 p.m. and close at 8 p.m.

General admission tickets are $20 for adults and $10 for children 6 to 12 years old, with children 5 years old and under admitted free.

Fireworks displays are also planned at:

— Three barges off the coast of Malibu will have displays;