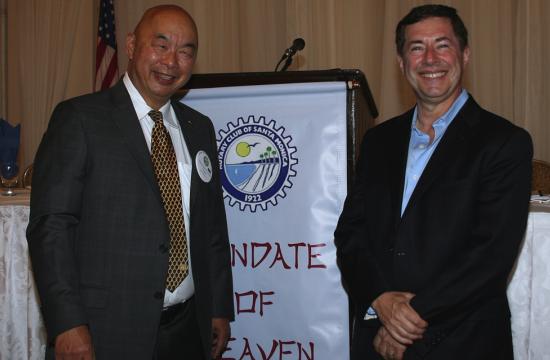 Four decades after Apollo 17 astronauts shot the “Blue Marble,” the first complete true-color image of the entire Earth, NASA released the updated version earlier this month of the fully sunlit Earth from one million miles away.

To view Earth in its most current state, wholly illuminated yet covered with expansive clouds, dangling in the blackness, provides equal parts amazement and a cosmic existential crisis. In this newest version of ourselves, our world, the Solar System cannot be seen. Our world is alone in the current Blue Marble, a visual definition of our remote place in the galaxy, at least for the time being.

When the famous British astrophysicist Edwin Hubble discovered that the universe is expanding, he essentially discovered the cosmos and supplanted one of the great intellectual revolutions of the 20th century.

About 25 years ago, scientists decided to name one of the most important science projects ever after the founder of modern cosmology: the Hubble Telescope. It was a joint ESA/NASA project with a mission allowing astronomers to make the very high-resolution observations that are essential to open new windows into planets, stars, and other galaxies.

The telescope has been responsible for supplying and unearthing some of the most awe-inducing photographs of the universe and for making over a million scientific observations.

The next generation of this successful but aging telescope will be the James Webb Space Telescope in 2018. During the final servicing mission in 2009, a docking device was fitted onto the base of the Hubble Telescope so that a rocket can easily attach and safely de-orbit the telescope once its mission is complete.

This is where Matthew Malkan comes in. The UCLA professor has been the principle investigator on low orbit Hubble Telescope projects more so than any other astronomer. He spoke to Rotarians on July 24 about what role these bigger-than-life telescopes have on the origins of the universe, and what plans the new telescope has in store for humanity, from the creation of the first galaxies to the evolution of young galaxies, observations about the Big Bang to galaxy surveys through cosmic time.

How we landed in one of the spiral arms of the Milky Way galaxy is one of the most frequently asked questions people ask of Malkan. A leader in his field, he has published more than 250 published articles and peer reviews and has focused on his research on infrared radiation, investigating active galactic nuclei and quasars, and the evolution of young galaxies.

His UCLA astronomy department biography describes his research with activity in nearby galaxies as “using high-resolution imaging from the Hubble Space Telescope to analyze the properties of the galaxies which host the various types of active nuclei. One result is that these data do not support the popular model that the principal properties of the active galactic nuclei are determined by the orientation of a compact hypothetical thick torus which surrounds and is aligned with the accrediting black hole.”

Malkan was also a Mashall scholar at the University of Cambridge, received his PhD from Caltech, and has been a professor of physics and astronomy at UCLA since 1992.

As co-author of the undergraduate textbook, “The Origin and Evolution of the Universe,” Malkan provided a dense overview to Rotarians of the Big Bang Theory and what measurements led scientists to think it had occurred.

One of the “most frequent questions that an astrophysicist always gets: how did we get here. When people are asking that what they’re really asking is, why did it happen and why are we here. That’s what we really want to know. Where we’re at right now, science can’t possibly answer all those things. But it’s kind of fun to see how close we can get,” Malkan said.

It begins with the stars and measuring light received from each star.

Astronomers have spent lifetimes measuring the positions, speeds, temperatures, and chemical compositions of millions of stars. Because they have measurements, we know that stars of the universe are currently seen spreading apart from each other, which means they have been close enough together in the past.

With a big enough telescope, one could essentially look far enough into the galaxy to go back in time to the very beginnings of the universe.

There is “overwhelming evidence” that most of the mass in the universe is dark matter – more than 95 percent. Malkan said that it all must have started with dark matter.

“All you need just to give it something, just a little bit of small excess density, little less gravity, expand a little slower, gets a little bit relatively denser than the rest of the universe which means gravity is stronger,” he said. “Extra gravity. So then that region slows down as more deceleration eventually stops accelerating at all and it collapses. And you can see this process happening if you can turn back the clock. If you can turn back time, we’re just using the slowness of light and the bigness of telescopes.”

And that’s why the James Webb Space Telescope is critical to detecting the first stars and galaxies that formed right after the Big Bang, almost 14 billion years ago. With a bigger telescope come more distant objects. The launch of the James Webb telescope will have to be released in space in pieces.

It’s an “incredible gamble and outrageously expensive,” said Malkan, but one he sees as worth it.