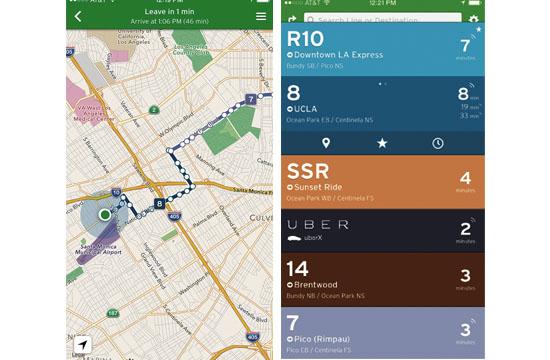 As of only a couple of weeks ago, Santa Monicans can now use an application called Transit to track the movement of their Big Blue Bus through real-time GPS updates. In addition to using the schedules posted at stops or looking online – which at best only gives a 30-minute window of when a bus could possibly be arriving – bus users can now see whether or not their bus is behind schedule.

This would have been useful when I was commuting four miles to UCLA from Santa Monica for my junior and senior year, naïvely thinking, before I moved, that the commute wasn’t going to be a big deal.

I was wrong. Really wrong.

That four-mile commute from where I lived in Santa Monica to UCLA would on average take about 30-40 minutes – and that was only on those very rare occasions when the bus was on schedule and would arrive at the bus stop right when I came walking (sometimes frantically running) up.

Most of the time, when you add in waiting for the bus, and then walking to and from the bus stop to my classroom, it would take an hour – and that was when the bus was only mildly behind schedule.

So when I heard that the Big Blue Bus got GPS trackers, I wanted to give it a try, hoping to reduce my bus waiting time around the City.

I left my apartment with the app saying that the bus would arrive in four minutes, so that if timed perfectly I would be getting to the bus stop right as it arrived.

When I got to the bus stop, it wasn’t there – something that I’ve been all too familiar with when trying to time the Big Blue Bus. I opened the app on my phone and it still read four minutes to arrival.

On the GPS tracker it still showed that the bus was stuck about six blocks down Ocean Park Boulevard, presumably intensive traffic or a glitch in the system.

I waited for about another five minutes, still nothing.

The tracker now read two minutes away. It then went back to four minutes.

After waiting about 10 minutes for the bus while my GPS showed it stopped only six blocks down the street and estimated it being only four minutes away, the blue bus finally materialized down the street, a block away from my bus stop. The real-time GPS finally read “0 minutes until arrival.”

At heavily utilized bus stops, you will find additional seating, lighting, and/or signage that provide real-time bus arrival times, but this, too, like on the app, is not an exact science.

This project is primarily funded by the federal government and the construction costs are approximately $7 million to improve bus stops within the City of Santa Monica only. The funds were earmarked specifically for this project. In general, federal funds are awarded for specific capital projects and cannot be reallocated elsewhere.

“We’re not the first city to do this, but now Santa Monicans can know before they leave for the bus stop whether they have time for another cup of coffee or need to hustle double-time to catch the next Big Blue Bus,” Mayor Kevin McKeown said.

While much better than relying on printed schedules, the tracker is still a little inconsistent, estimating one time and then adding more time a minute later.

But maybe that’s not the GPS’ problem, but rather the nature of public transportation in L.A. and Santa Monica: it’s never going to be perfect. Users must adjust their idea of “real-time” to something more relative to L.A., allowing for the intensive and congestive traffic to slow everything down.