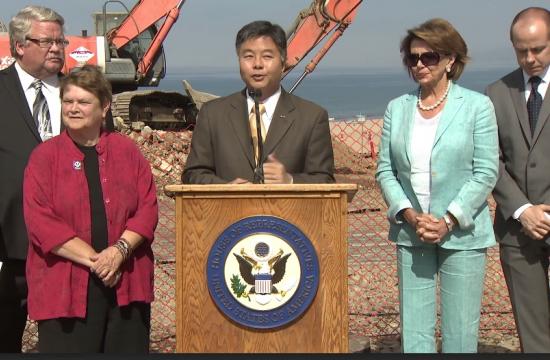 The politicians said the California Incline site was a perfect example of how local, state and federal investment is creating local jobs, boosting the economy and paving the way for vastly improved infrastructure in Santa Monica, Los Angeles and beyond.

“In just a few short months in Congress, Ted Lieu has already distinguished himself as a leading voice for revitalizing the infrastructure of our cities and communities,” said Pelosi. “Now is the time to make the big, bold investments in infrastructure that America needs to compete and succeed in the 21st century. With Democrats’ Grow America Act, we can make a robust, long-term commitment to rebuilding America – creating jobs, and unlocking a brighter future for our country.”

Lieu’s said steel in the spine of the American economy was forged by the middle class.

“A fundamental way to energize the middle class, to rebuild and renew our nation is by making a robust, long-term commitment to infrastructure investment,” Lieu said. “Such long-term investment, embodied by the Grow America Act, creates millions of jobs that cannot be outsourced, expands the economy, and rebuilds the infrastructure that America needs to continue as the leader of the 21st century global economy.”

McKeown said stable, ongoing federal funding is crucial to Santa Monica’s ability to deliver the infrastructure improvements our residents depend upon.

“Congressman Lieu and Leader Pelosi are our champions in making sure Santa Monica can build a better future with federal funds,” McKeown said.