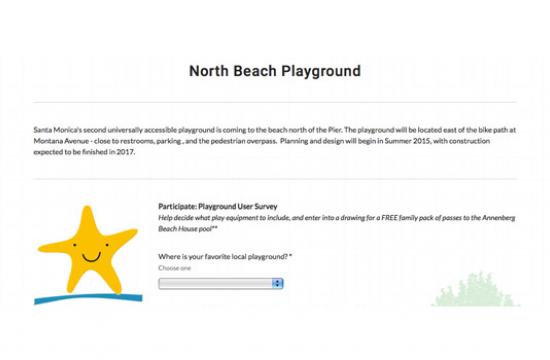 The City of Santa Monica is kicking off the North Beach Playground project by seeking broad community input that will help shape the design of this new public amenity.

Located on the beach at Montana Avenue, the north beach playground will be Santa Monica’s second universally accessible playground. Public input is needed to ensure that the design will meet community needs.

The public is invited to take a quick survey online at www.santamonicaparks.org. The survey is focused on playground use and favorite types of equipment found at similar playgrounds in the area. People completing the survey have the option to be entered into a raffle to win a family pool pack to the Annenberg Community Beach House, good for entry for up to two adults and two children. The survey will be online until Aug. 16, 2015.

“A Mayor’s job is not all work and no play, and Santa Monica’s second universally-accessible playground will allow active outdoor recreation for children of all abilities,” said Santa Monica Mayor Kevin McKeown. “Places to play, explore, and have fun with friends and families are essential to our children’s health and wellbeing. This new North Beach playground builds on the proven success of our first universally-accessible playground to the south, and makes Santa Monica’s beaches even more welcoming and special.”

Since opening in 2013, Santa Monica’s first universally accessible playground became an instant hit with children and families. These playgrounds incorporate features that integrate play for children of all abilities.

The Santa Monica Disabilities and Recreation & Parks Commissions were key advocates. Construction of the north beach playground is anticipated to begin in 2016 with completion projected for 2017.