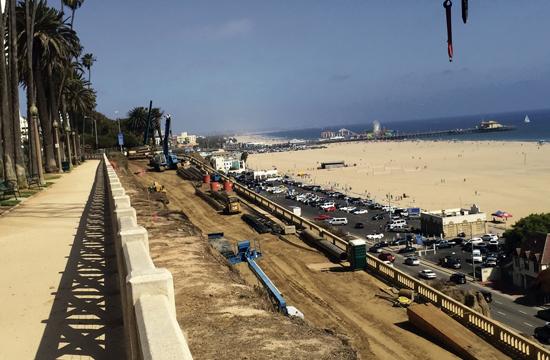 The construction now underway on California Incline has at least one Santa Monica resident wondering why there aren’t more people working on it at a time.

“I’ve driven by and sometimes only see a handful of people working with all these large vehicles parked with no one in them,” said Mark Bystrak, a Santa Monica resident who frequently uses the Incline on his way to Malibu when the waves are good. “It just seems like there would be more people working, right?”

Not so, according to the city. The amount of workers on-site depends on what work is to be done that day. They aren’t going to hire 50 people for a 20-person job.

“Depending on what work is being done and what trades are doing the work, the size of the crew varies throughout the project. So an average crew is about 20 to 25 workers and, at the peak of construction, when they’re doing construction pours, they will have 50 to 60 people on site,” said Susan Cline, Interim Director of Public Works. “So it just depends on what trades are working on any given day…it is going to ebb and flow by trade.”

For others enjoying the shade along Palisades Park, the construction was not an issue. One man, sitting down with his bike next to him, said he hasn’t noticed a change—however, he doesn’t drive. His bike gets him where he needs to be.

One man said that “it is what it is” and residents should just deal with it.

Full closure of the incline began on April 20 so it could be completely demolished and rebuilt.

The project is to upgrade the road, which is technically a bridge, to meet current seismic standards.

The road, which descends from Ocean Avenue to Pacific Coast Highway, connecting the bluffs with the beach, is used by 15,000 vehicles daily. Nearly the entire project is federally funded and will only cost the city about $2 million of the nearly $23 million total.

What is for sure is that the construction has jammed traffic going towards Malibu. For Bystrak, it has taken him nearly two hours to go from Santa Monica to Malibu, opting to take backstreets that spit him out near Patrick’s Roadhouse on PCH to avoid taking city recommended detours.

“You have to hope the waves make it worth the entire trip,” he said. “Lets just say I can’t wait for the thing to be done,” referring to the completion of the Incline.

To help mitigate traffic congestion, during the demolition and construction of the California Incline, the Colorado Esplanade Project, and the EXPO Light Rail Project, the Department of Public Works shall limit construction activities that affect streets, sidewalks, alleys, or parking in the Area of Special Consideration, according to the city. The purpose of this limitation is to minimize traffic impacts of construction on residents, visitors, merchants, and customers while these projects are underway.

According to Cline, the project is still on schedule to finish by Memorial Day of next year, which is good news for everyone.

“It was scheduled this way so that it only impacted one summer,” Cline said.