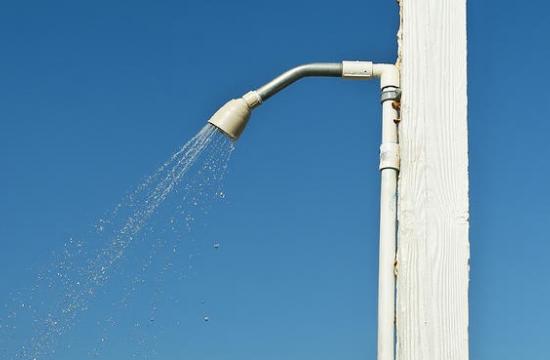 Her long blond hair matched the color of the sand she stood ankle deep in. Her three boys, covered in both dry and wet sand, played around her feet.

Sally Shipkey took off Tuesday to spend the day near the pier at Santa Monica State Beach with her sons, who’re all out of school for summer.

“I thought that it would be nice to get out of the house and spend some time together and what better way to do it than at the beach,” Shipkey said.

When asked whether she knew about the soon-to-be state wide outdoor shower closures that began Wednesday, her eyes got big.

“No,” she said, gesturing to what seemed to be everyone at the beach, “what is everyone going to do with all this sand stuck to ‘em?”

Those visiting Santa Monica State Beach, however, will not have to worry about her question. Local beach showers will remain open all summer long so beach goers can continue using the showers to wash off that sand before they head home.

A statement issued by California State Parks said that “effective June 15 all state parks and beaches will shut off outdoor rinse stations.”

“California is facing extremely severe drought conditions,” said California State Parks Director Lisa Mangat. “It is important for all Californians to conserve water at home, at work and even when recreating outdoors.”

While the announcement does not directly affect Santa Monica, it has led the city to look at ways to help reduce water usage along beaches.

“When we were notified that State Parks is planning to shut down showers, we looked at the impacts of turning off the showers and determined that other water saving measures, such as reducing frequency of irrigation of landscaping, will meet the 20 percent water reduction,” Meister said. “We are also looking at improving the automatic shut off valves on the beach showers. Given the vast number of people visiting Santa Monica beaches, we determined that the provision of beach showers is an important amenity for the public.”

California State Parks suggested water-saving alternatives to the outdoor showers such as using a towel or brush to wipe away sand, bringing water from home in a re-useable jug, or using a pressurized spray.

“I’m glad we can use the showers, still,” Shipkey said, helping her kids get the sand off in the outdoor showers. “It would get all over my car otherwise.”

A surfer got out of the water and headed straight for his car, not even glancing at the showers. The sun was setting as he made his way across a stretch of sand, the sand clumping to his feet and the leggings of his wetsuit.

He took off the wetsuit and placed it in a plastic bin filled with two inches of water. The met suit nearly submerged in the fresh water as it slushed back and forth as he placed a top on top of the plastic bin and put it back into the trunk of his car. He then took out a jug of water to clean his feet and wash the sand out of his hair.

“I’ve never used the showers,” the surfer said. “I bring water to clean myself and my wetsuit off. I always take a shower when I get home anyways, why waste more water?”