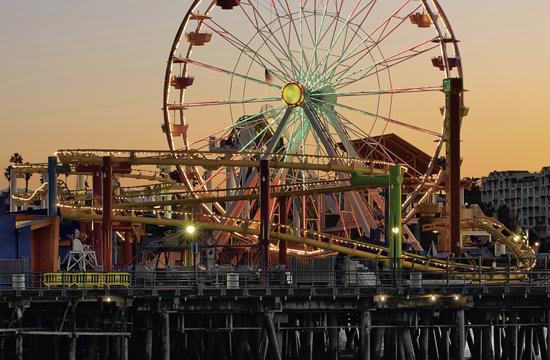 Santa Monica Pier and beaches have reopened to the public today with authorities saying they will continue to monitor weather conditions.

The Pier and beaches were closed and evacuated Saturday afternoon due to the threat of lightning, police there said at 2:35 p.m.

Western Los Angeles County appeared to have gotten the heaviest rain Saturday, as most areas were dry but some soaked.

One backyard weather gauge near Zuma Beach got an unofficial .70 inches of rain.

In central L.A., .16 inches was recorded at USC, and .11 near the Civic Center, according to the county’s rain gauges.

Beaches from Long Beach to Zuma were closed by lifeguards Saturday  morning and again in the afternoon, when lightning flashed and unusual summer clouds dropped scattered heavy rain, a gift from a dying Mexican hurricane.

L.A. County beaches were closed for 100 minutes in the morning, and again at 2:10 p.m., when lifeguards were alerted by the National Weather Service that lightning was moving into the area.

All across the basin, lightning and thunder was widespread, and morning freeway traffic slowed to 20 miles per hour in heavy rain on Interstate 10 in the Inland Empire.

“Please take the advice of lifeguards on the beach and seek safe shelter indoors,” begged Los Angeles County lifeguards, using all capital letters on the word “please” in their Twitter message.

“If you are unable to get into a building with four walls and a roof for cover, get into your car!” the lifeguards exhorted. “Do not get into ocean.”

The stern warnings came following the death of one surfer and hospitalization of seven others last summer, when a “bolt from the blue” lightning strike hit the Venice Pier and electrified both it and the surrounding ocean.